Do it with us! Do it better than us!

Today, on the 30th of August, a Day of Sport took place at the Festival Children Village. Kids participated in sports games, competitions and workshops from famous Russian sportsmen and found out about the biggest international youth sports project - the World Winter Universiade, which will be hosted by a Russian city Krasnoyarsk in 2019.

Anna Sidorova, Honored Master of Sports of Russia, Head of National Women Curling Team, Repeated Winner of European and World championships, Double Winner of Winter Universiades as a part of the national students team, started the program with an energetic workshop for kids. From the stage Anna was demonstrating movements, which were diligently and enthusiastically repeated by children standing in front of the stage.

After a warm up with Anna, children willingly participated in competitions and races, demonstrating their speed, aiming accuracy and skillfulness, winning prizes from «Spasskaya Tower» Festival and XXIX International Winter Universiade and free ice cream from sponsors. Parents at the Red Square were actively cheering their kids and taking their photos for family albums.

Irina Dyuk from Moscow came to the Children Village of the Festival with her three daughters, Anya, Yana and Maryusya. The thematic Sports Day at the Red Square became a nice surprise for the family, because all the three sisters of 6, 10 and 11 years old are doing hockey in the Moscow Children and Youth Sporting School «Meteor», thus they enjoyed a lot the activities at the Festival venue. As their mother says, sport activities are necessary for everyone: «First of all, it makes you healthy, goal-oriented and develops your ability of team work. A child will need this in the future, whatever he or she decides to do in life. We are not planning to participate in the Olympic Games yet, however we would like to participate in the Universiade, I think it is quite realistic, because my girls have been doing hockey for a long time and enjoy it a lot!»

Svetlana Khorkina and Adelina Sotnikova were also named XXIX International Winter Universiade Ambassadors at the Festival. The official inaugural ceremony was held by Elena Shamakhova, Head of the Permanent Delegation of the Krasnodar Region in the Russian Government, and Denis Branchukov, Deputy Head of the Executive Branch of XXIX International Winter Universiade Administration in Krasnoyarsk.

«A unique sporting event which is going to take place in Russia in 2019 will give an opportunity to young people from all over the world to establish new sporting records, will give a chance to many guests of Russia to get to know more about our country, Siberia and Krasnoyarsk in particular», - says Elena Shamakhova. - Universiade Ambassadors play a very important part, because they promote sport and healthy lifestyle among children and young people, demonstrating itthrough personal example».

The new ambassadors were welcomed by Denis Branchukov as well: «Svetlana, Adelina! Welcome to a friendly team of Universiade Ambassadors, I am convinced that your great achievements will encourage thousands of girls and boys to continue doing sports in the sport sections all around the country and to make our country feel proud for them in the future!»

A special photozone «Snow Globe» created an atmosphere of the upcoming Winter Universiade (which will happen in 549 days in accordance with the countdown made by its organizers) at the venue. A huge transparent globe with artificial snow inside was installed at the Children Village. Visitors could enter inside it to make photos, however they had to wait because of long queues. U-Laika, a friendly lucky charm of XXIX International Winter Universiade was also very popular - a lot of people wanted to take photos with this kind and loyal friend, a symbol of Siberia.

«It is symbolic that children and young people got acquainted with the world Universiade at the venue of the International Military Music Festival «Spasskaya Tower». It means that we are organizing a beautiful, worthful and major event all together. Everyone wins, our country in particular!», - confidently states Svetlana Khorkina. 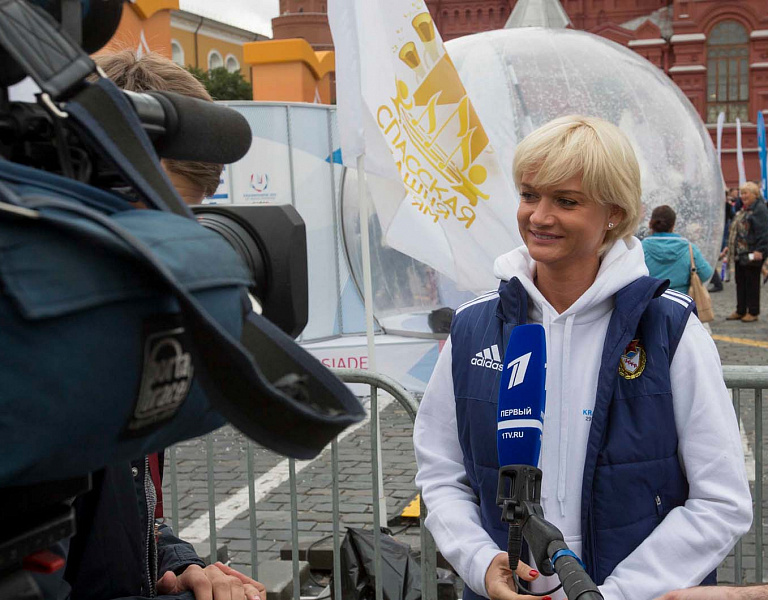 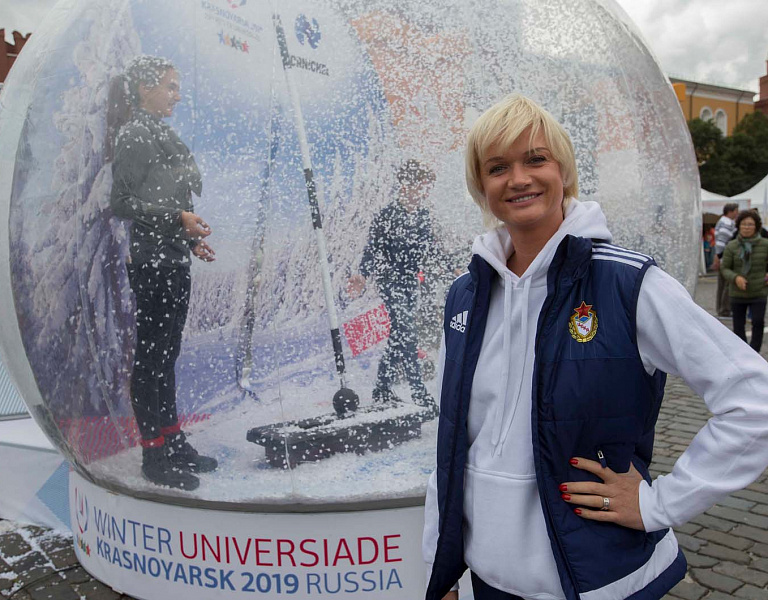 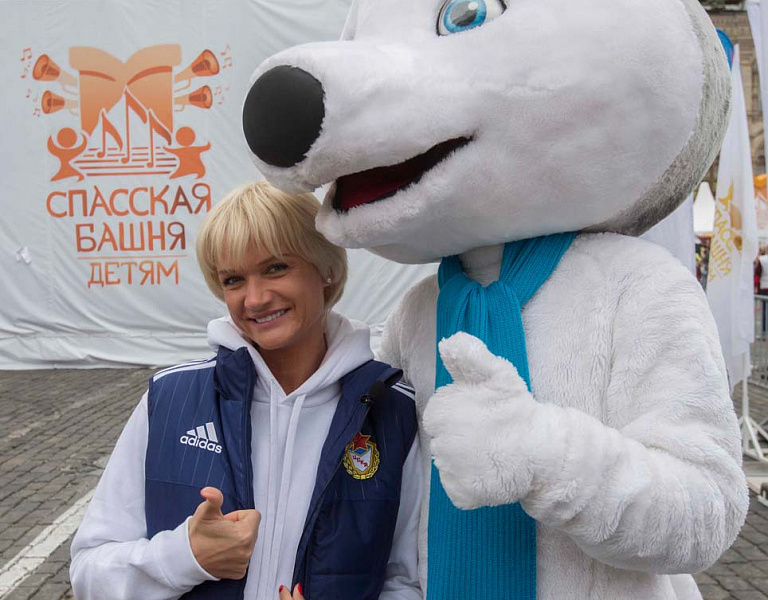 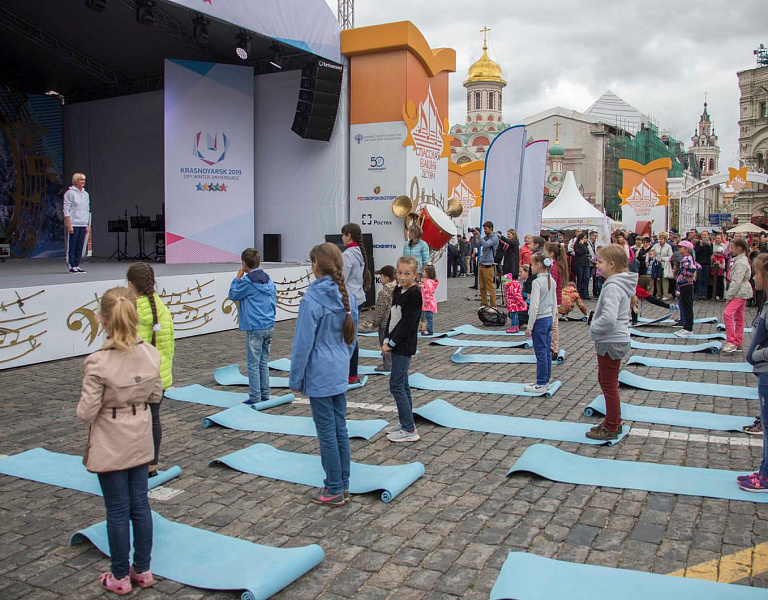 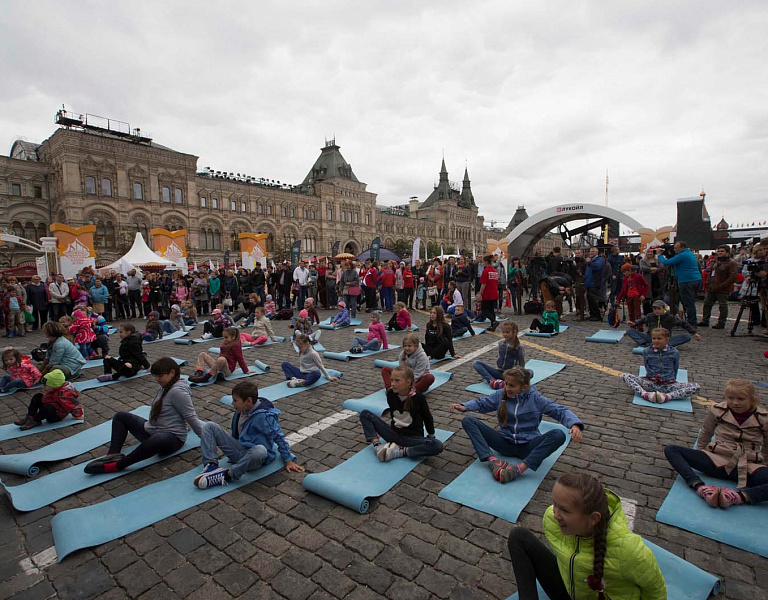 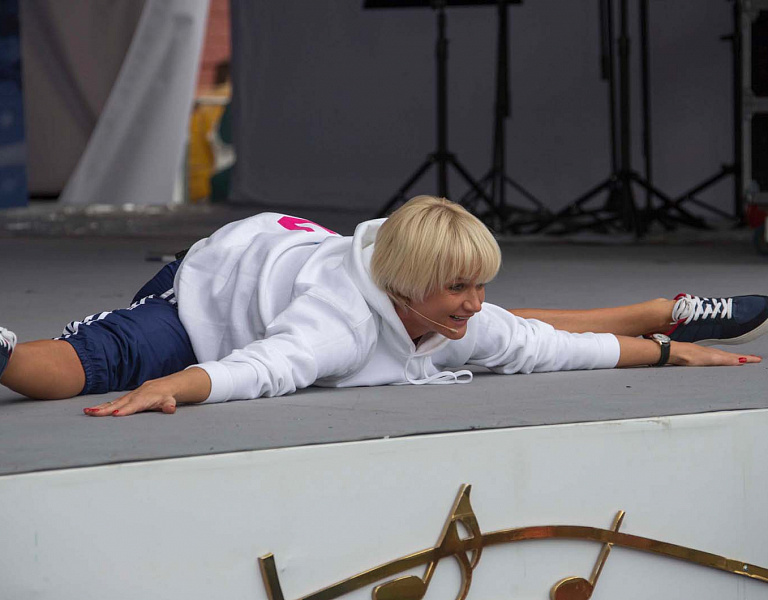 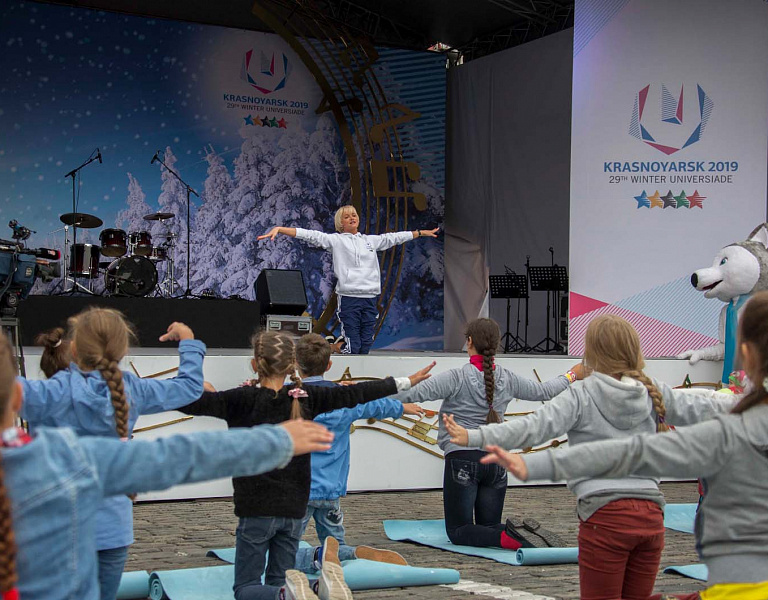 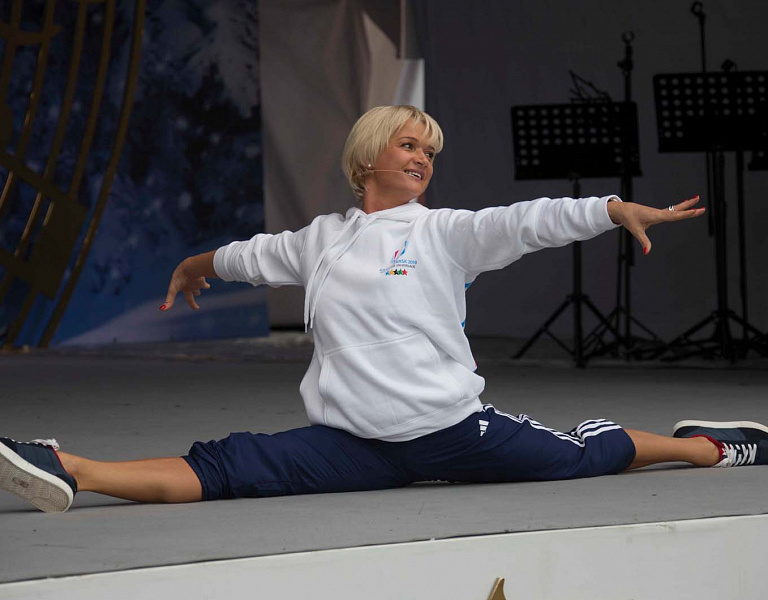 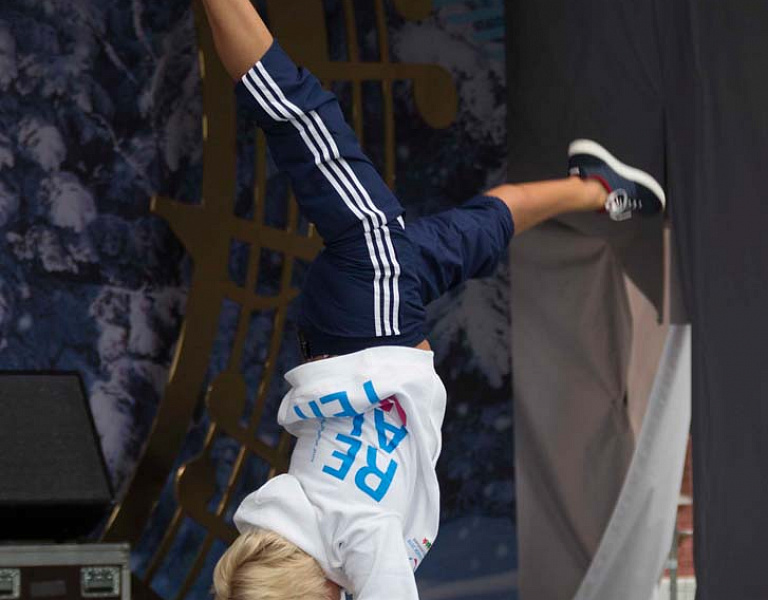 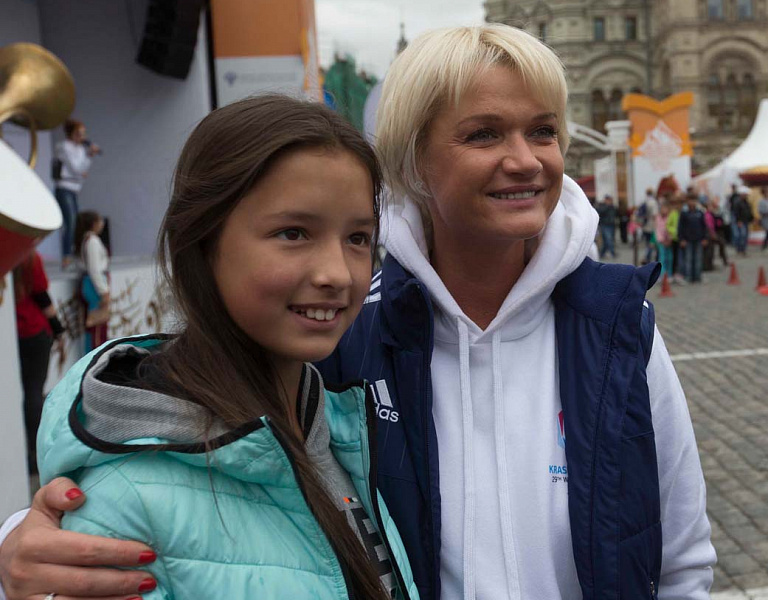 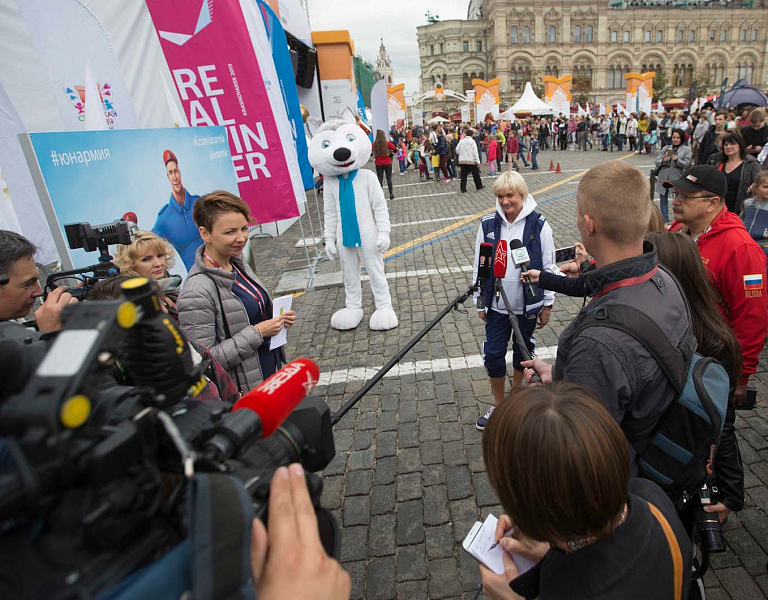 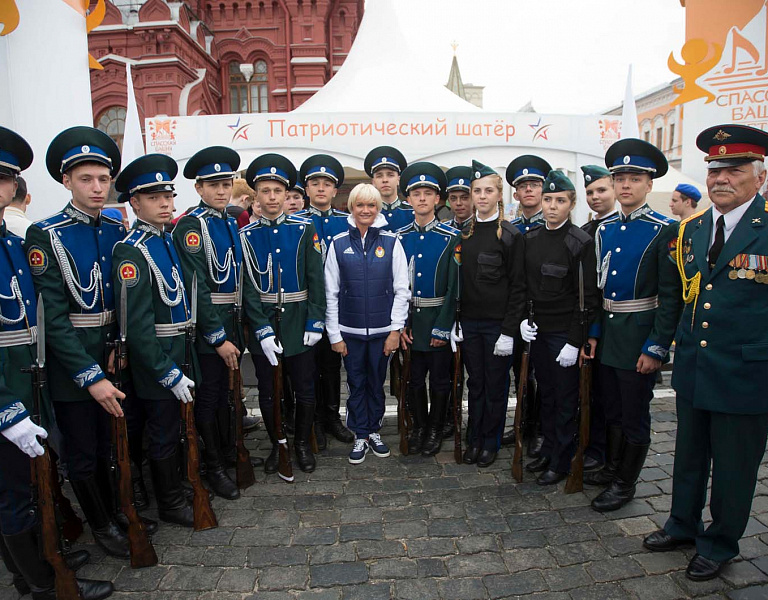 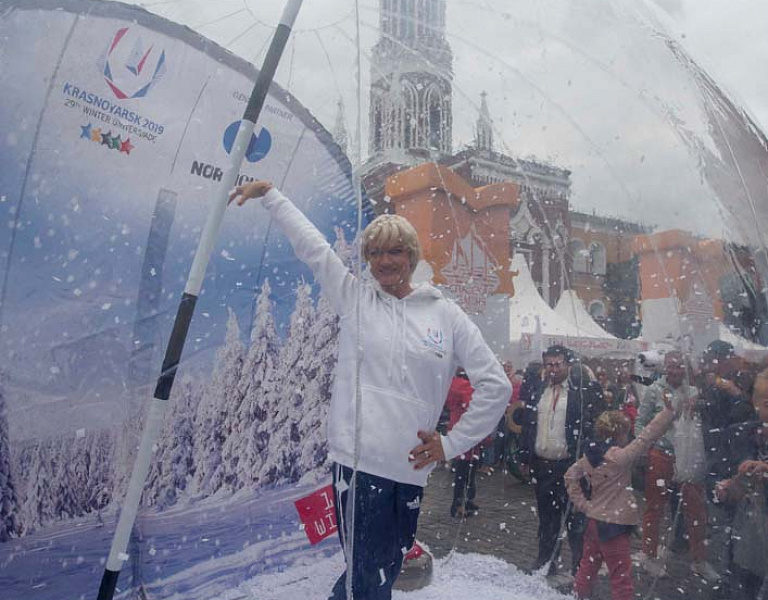 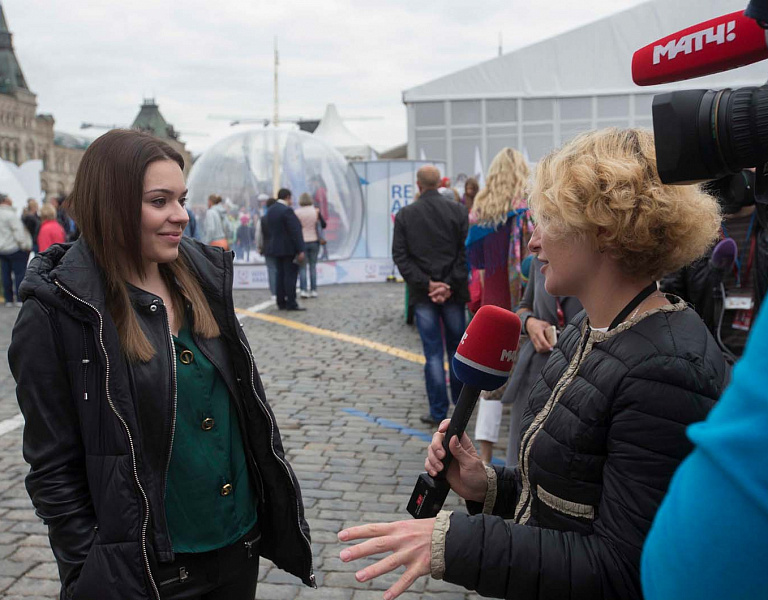 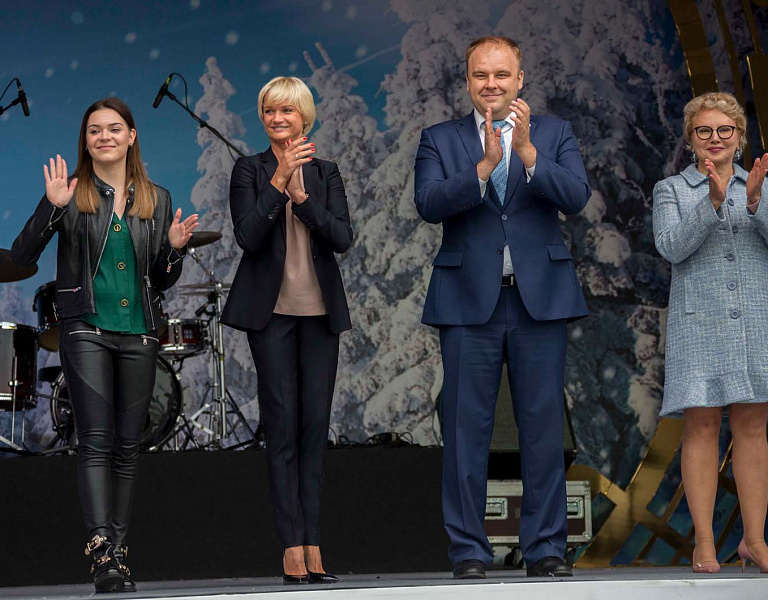 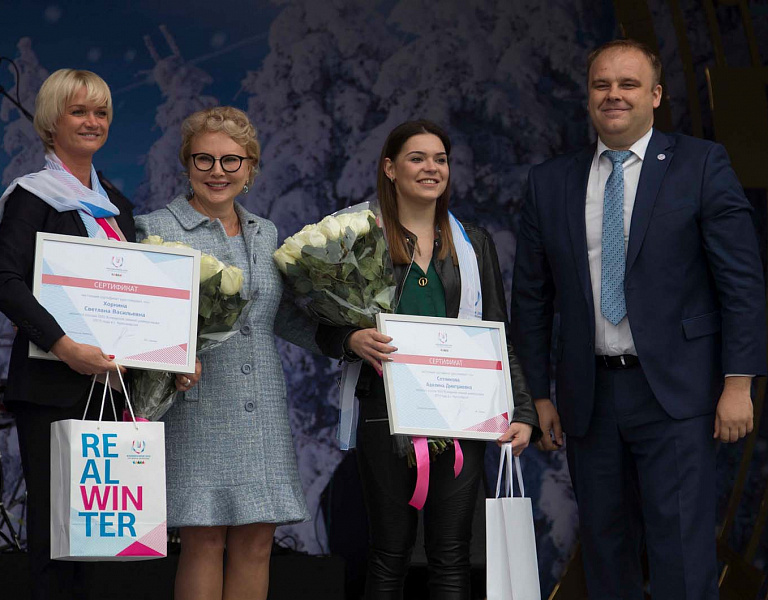 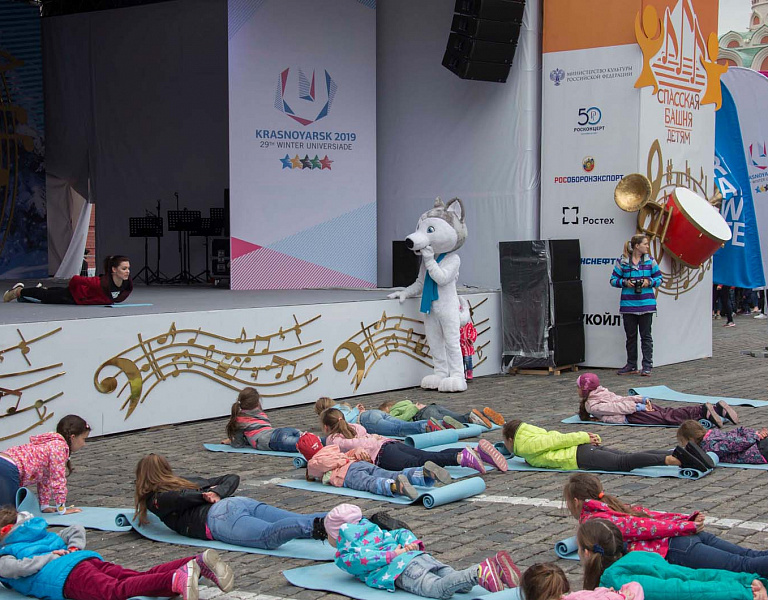 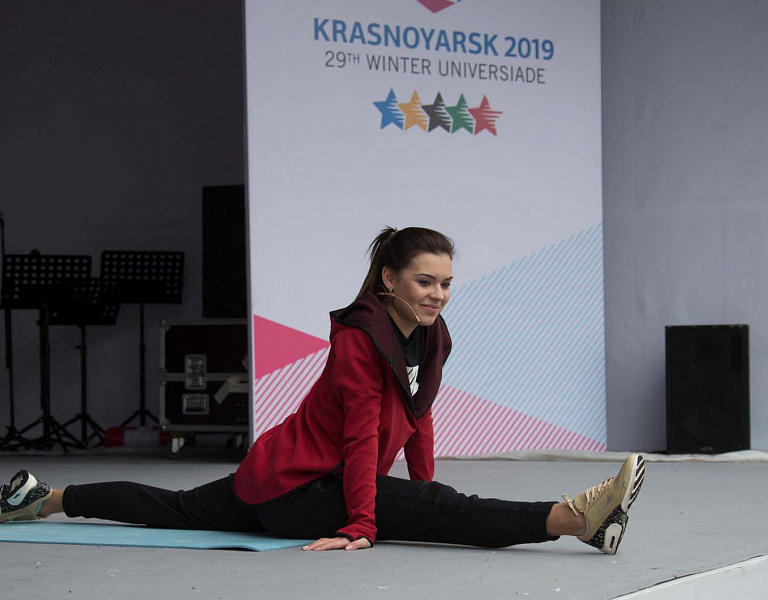 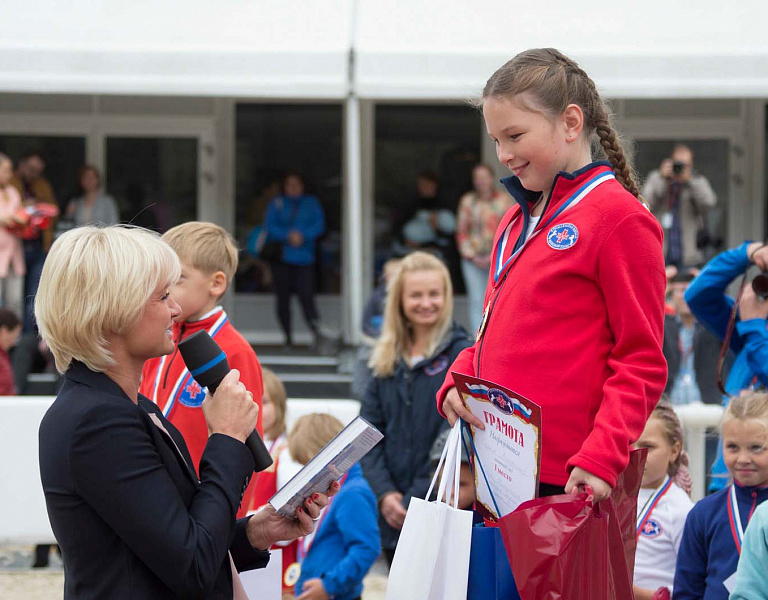 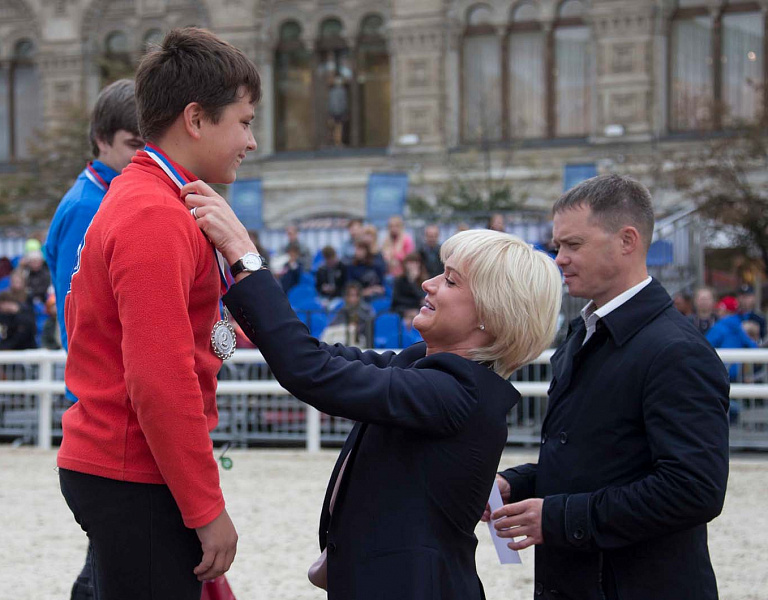 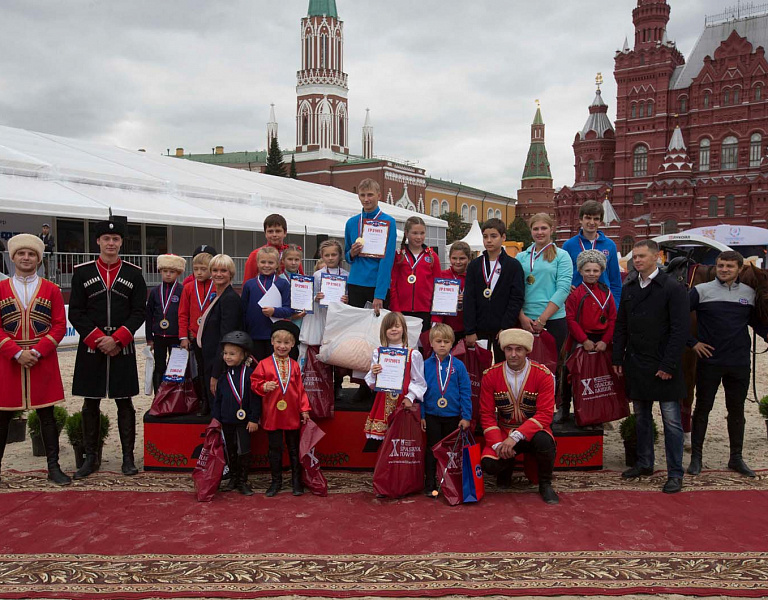 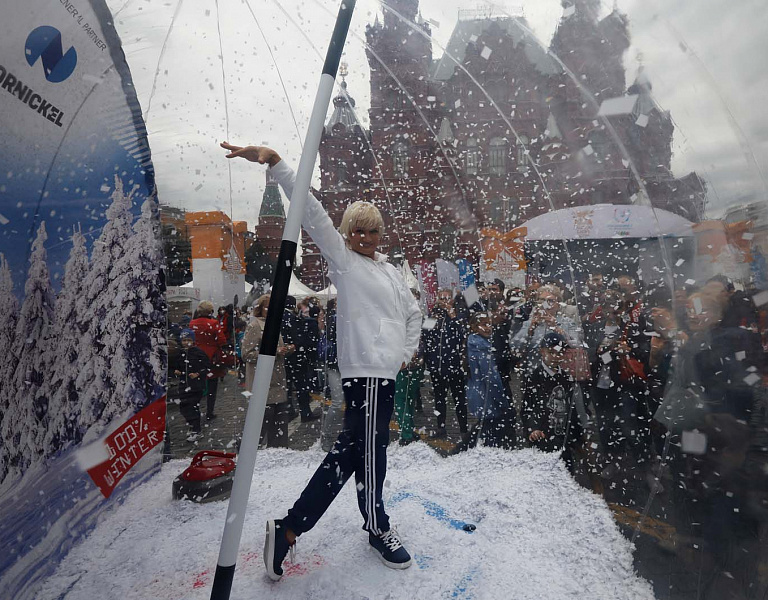 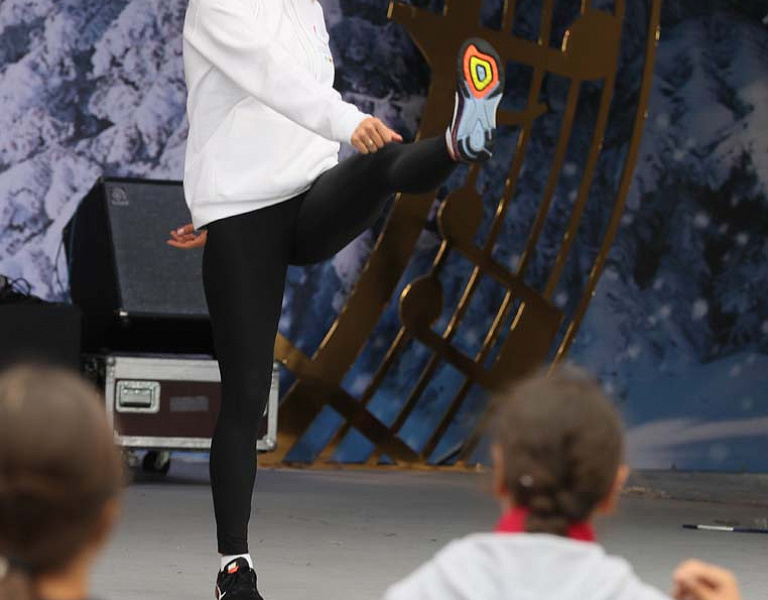 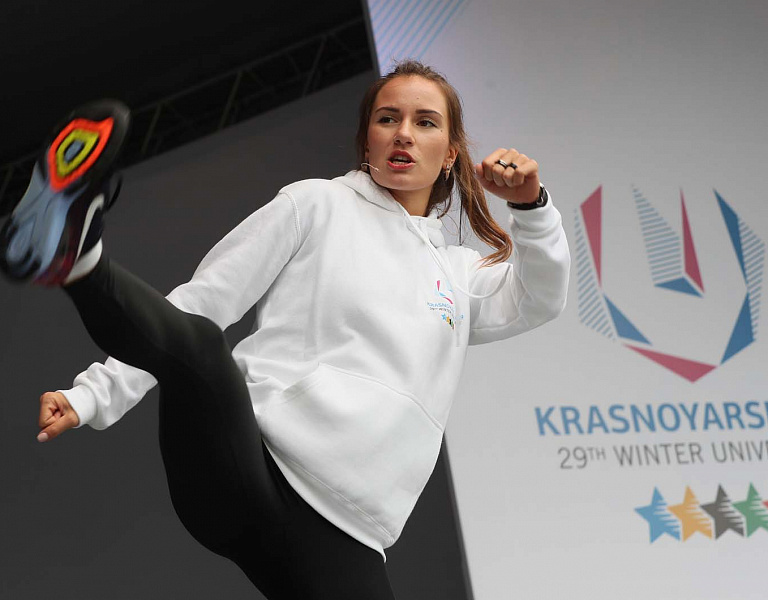 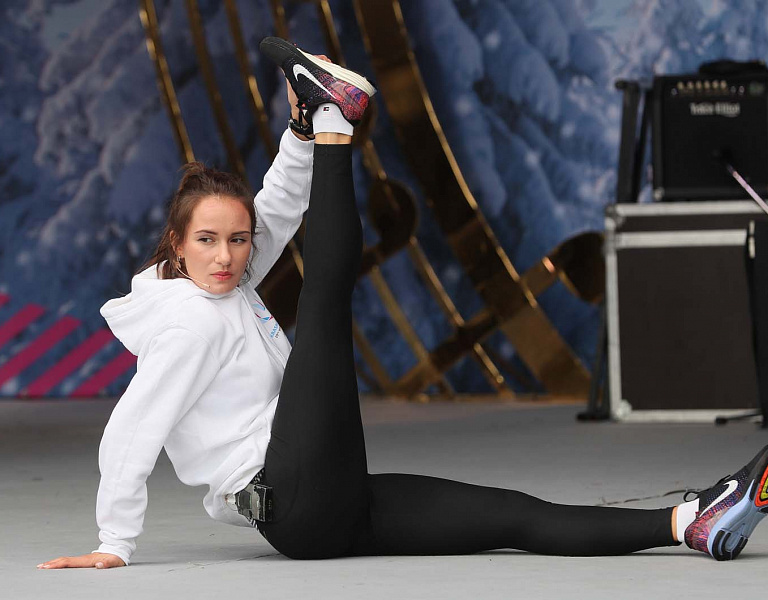 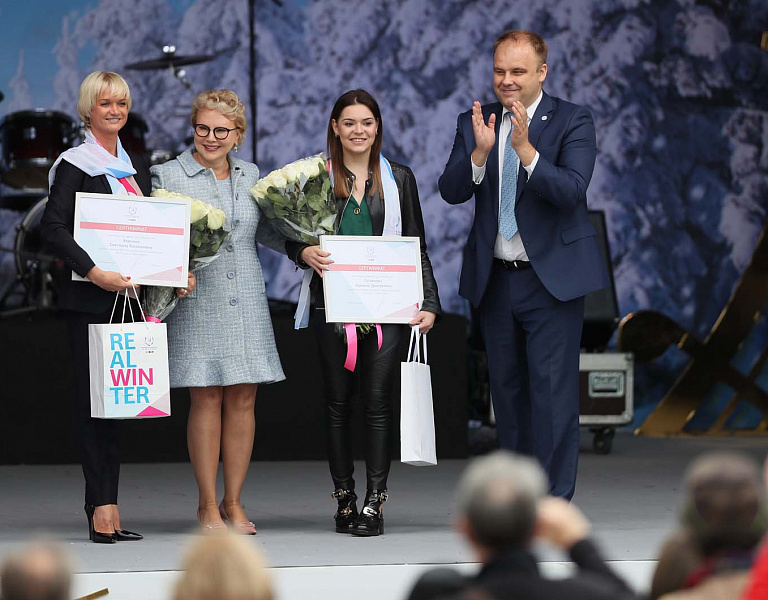