On the 31st of August as a part of X International Military Music Festival «Spasskaya Tower» the Day of Horse was announced in memory of Holy Martyrs Florus and Laurus, which were considered as patrons of horses and other domestic animals in the ancient Russia.

A thanksgiving service was organized at the horse ring of the Red Square. After that a performance of the Kremlin Equestrian School, three horses’ show of the Trotter Breeding Association of Russia and Escuadra Ecuestre de Palmas de Penaflor (Chile) took place.

The tradition of the worship of Florus and Laurus came to Russia fr om the Balkans, the birthplace of the saint brothers. It is known that they lived in II century, worked as stone cutters and constructed a pagan temple in Illyria (the modern Yugoslavia). When the construction was over, Florus and Laurus gathered the Christian people, who participated in the construction, crushed the idols and put a Saint cross in the temple. After that they stayed praying the whole night. As a punishment for what they did, they were thrown to an empty well and covered up with soil in accordance with the order of Liakon, the governor of Illyria. As the legend says, when their hallows were found, loss of cattle stopped. It was a miracle.

In the ancient times the Day of Holy Martyrs Florus and Laurus was celebrated all across the country. This day horses were treated in a special way: they weren't neither saddled nor tackled, but only cherished and fondled, and their manes were plaited with ribbons. Prayer services were organized this day, and later a «horse entreaty», when the horses were sprinkled with water. In this way horses were cured and made strong and sturdy.

The thanksgiving service in praise of God and the Holy Martyrs was held by Protoiereus Vyacheslav Shestakov, beneficiary of the Patriarchal Metochion of Zaryadie Temples at the Kitay Gorod District. Priest Maksim Mikhailov and Deacon Aleksander Shishkin assisted him while a choir sang canons of the same metochion.

Before starting the praying, the Protoiereus told why Florus and Laurus were canonized as holy martyrs, and complained that the world is so cruel.

«There is not enough love in this world, which is basic for a human life. The only way we get love is to get it from the God, because the God is love», - he said.

After the service Vyacheslav Shestakov passed along the formation of Orlov trotters - the pride of the Russian horse breeding - and sprinkled them together with their owners standing nearby with holy water.

«In the ancient times the moscovites were coming with their horses to the service to the Church of Florus and Laurus, which used to be located at the territory of the Moscow Kremlin to get their horses sprinkled with holy water, - says the Protoiereus. - It is great that the Kremlin Equestrian School has resurrected this ancient tradition».

The owners of the horses are cavalry women of the 1st Police Anti-riot Regiment of the Head Department of the Ministry of Internal Affairs in Moscow, a security and law enforcement service for special events. Their performance was called the «Ceremonial Ride of the Moscow Mounted Police». During the show the horses were conducted at trot.

After that a horse show from the Trotter Breeding Association of Russia took place, wh ere the horsemen trotted several times across the horse ring.

The three horses as an embodiment of the dashing Russian soul became a symbol of Russia. In the times of the Russian Empire three horses were an ideal mean of transport because of the country’s large distances and impassability of roads. Foreigners always enjoyed the dashing and fast ride in a three horse carriage.

The first part of the program of the Day of Horse was highlighted by a horse show of the Escuadra Ecuestre Palmas De Peñaflor - a band from Chile, which came to «Spasskaya Tower» Festival for the first time. The band travels all around the world, promoting the Chilean culture and traditions. Chilean horsemen were wearing their national costumes of huasos - colorful ponchos and wide-brimmed black hats. In the second part of the show seven horsemen bearing Russian and Chilean flags appeared at the stage. By the way, Russian and Chilean flags are of the same colors: red, dark blue and white. The unique atmosphere was complemented by dances and authentic music. Spectators of the show had a chance to see various types of dances - national, ritual and even dances of the Papuans. Horseman were riding and circling in front of the dancers. At the end of the show there was a ride and a walk with many flags, and the final dance, which was very impressive - horsemen, dancers and flags formed a sophisticated figure, eliciting applause from the audience.

«This show was very impressive and unique, and I have also enjoyed the dynamic music», - said priest Maksim Mikhailov.

At 6:30 PM horsemen of the Honor Guard of the President’s Regiment demonstrated their riding skills. 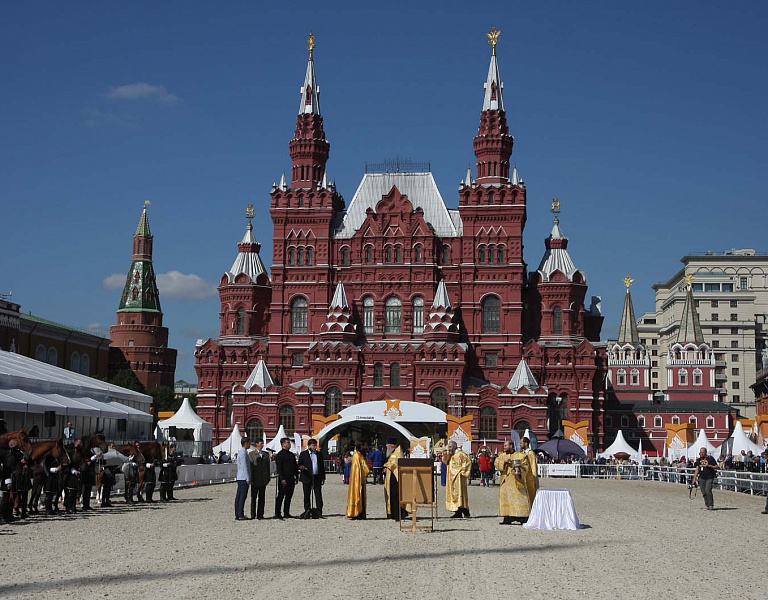 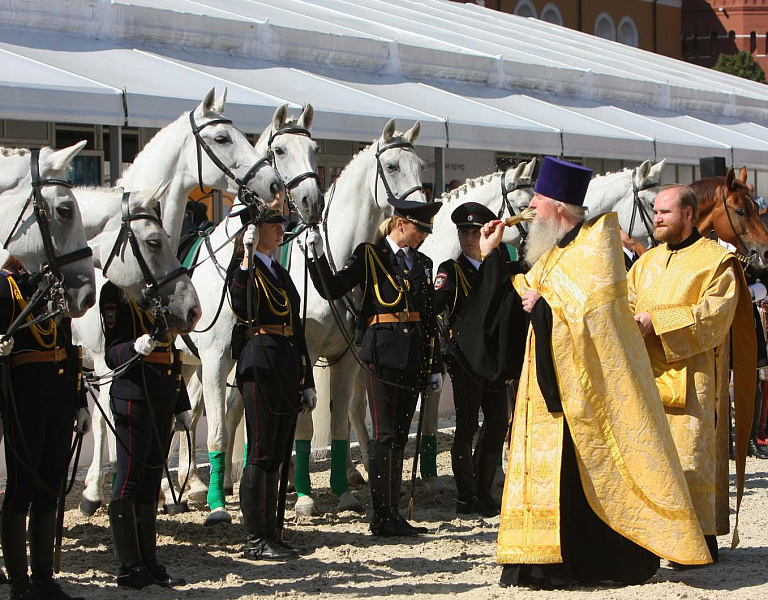 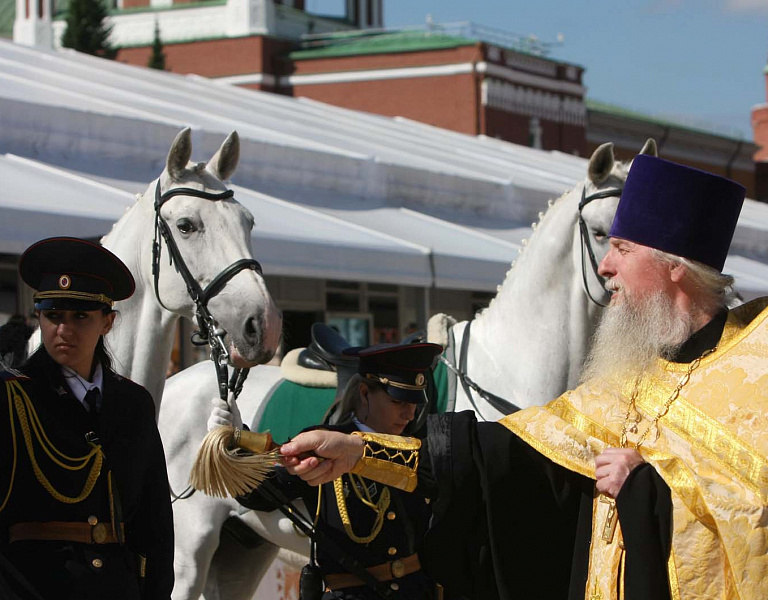 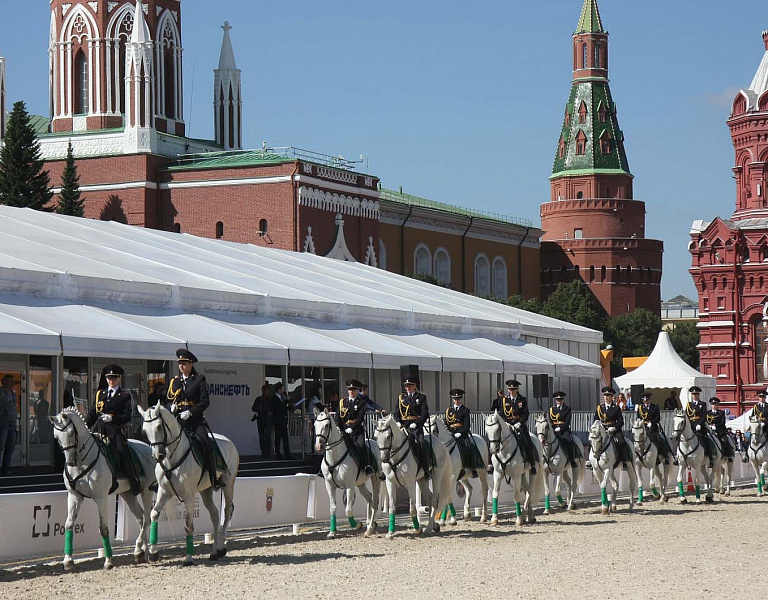 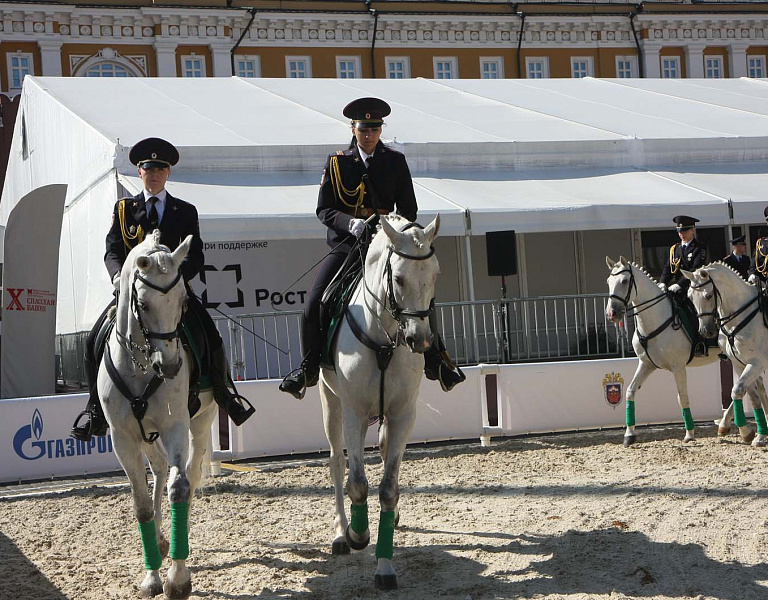 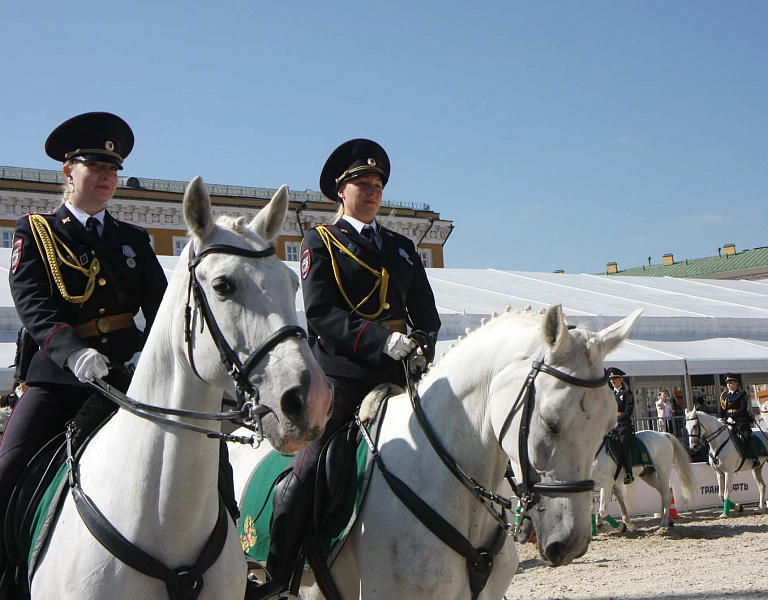 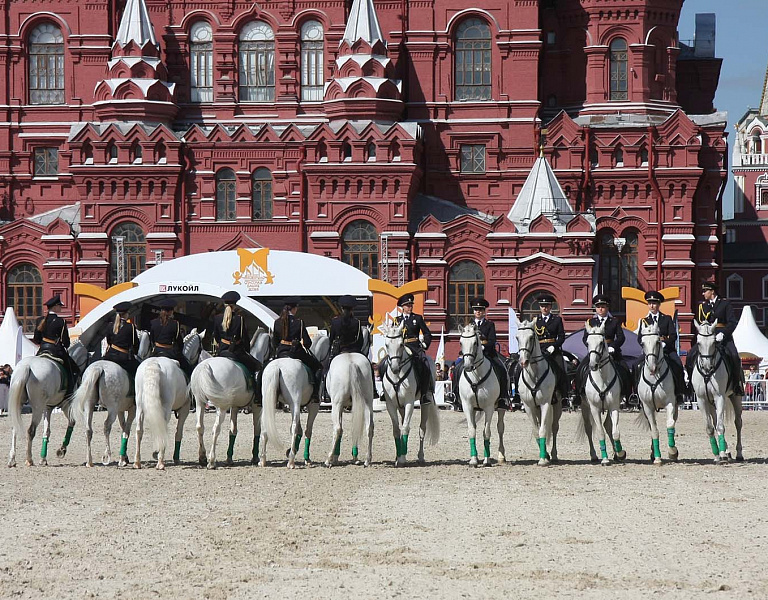 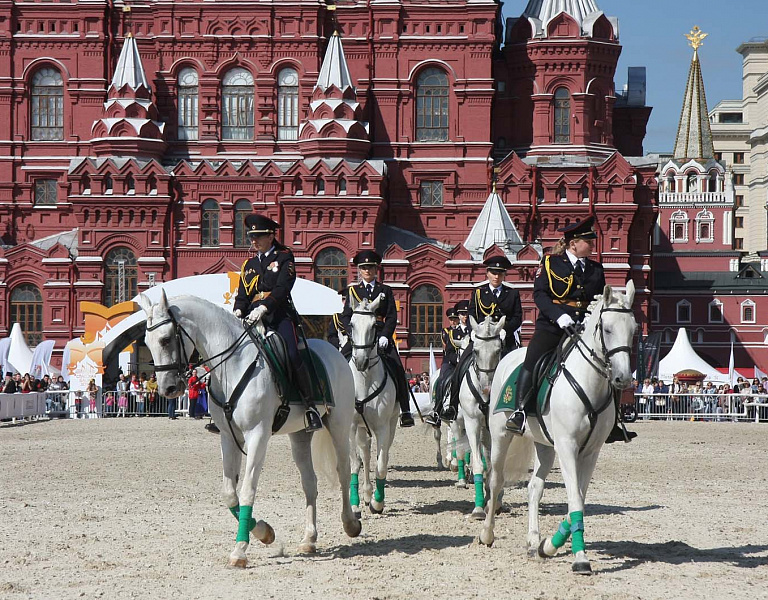 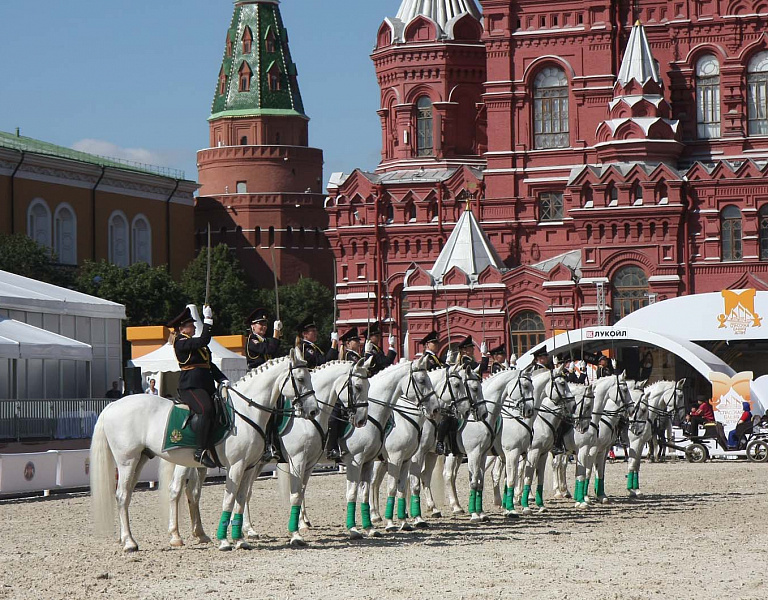 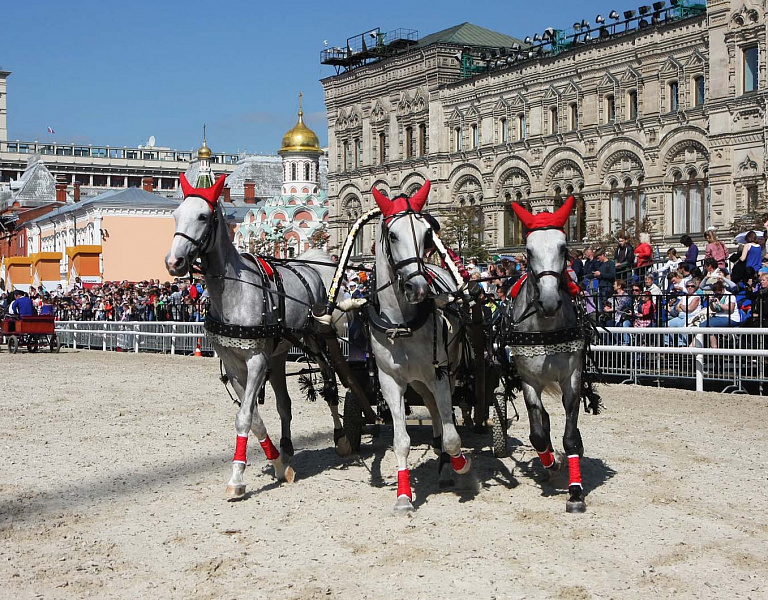 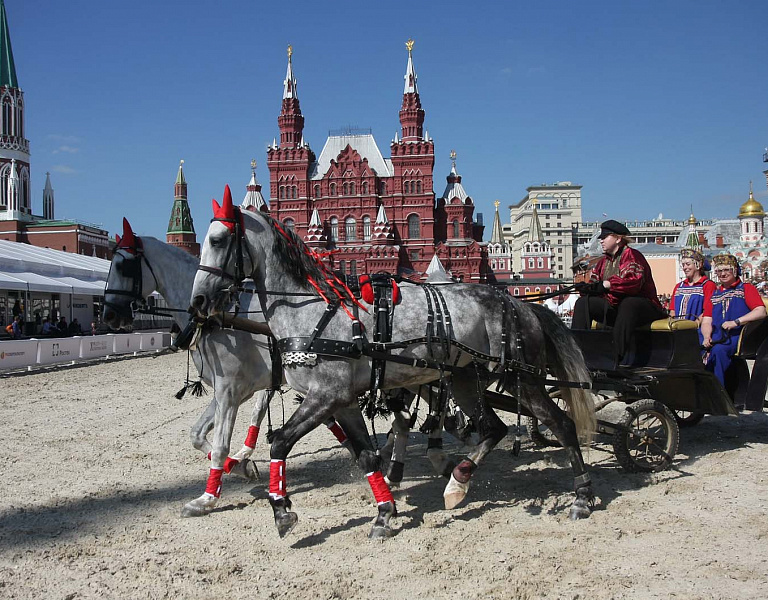 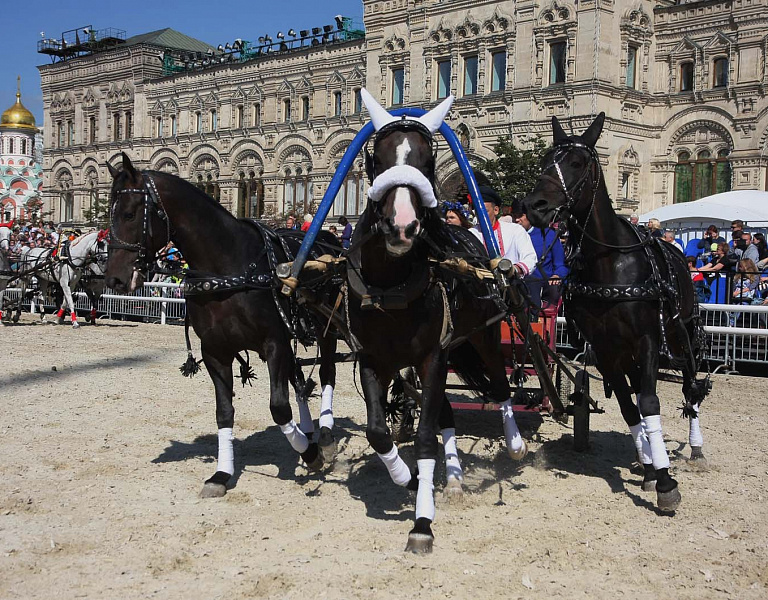 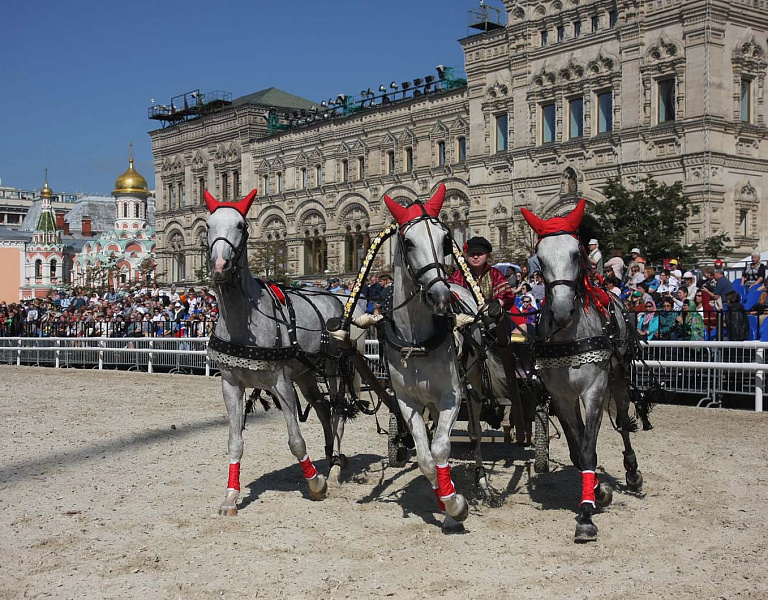 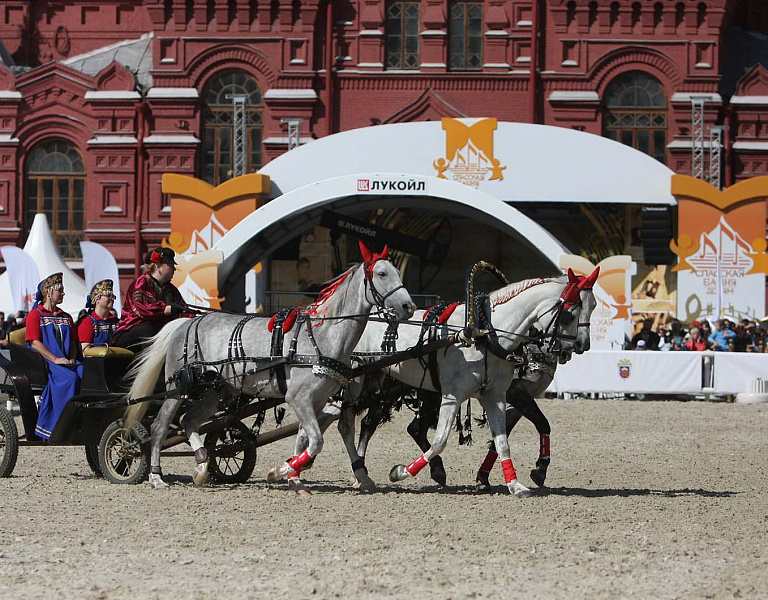 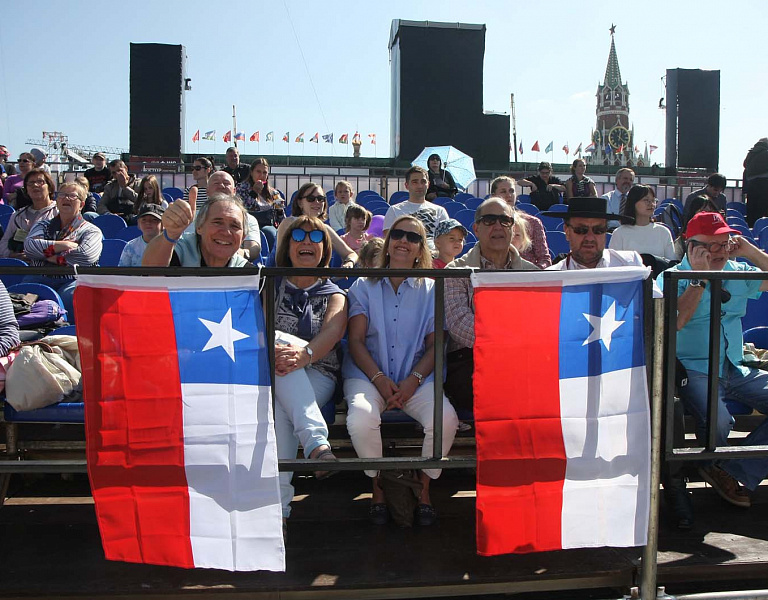 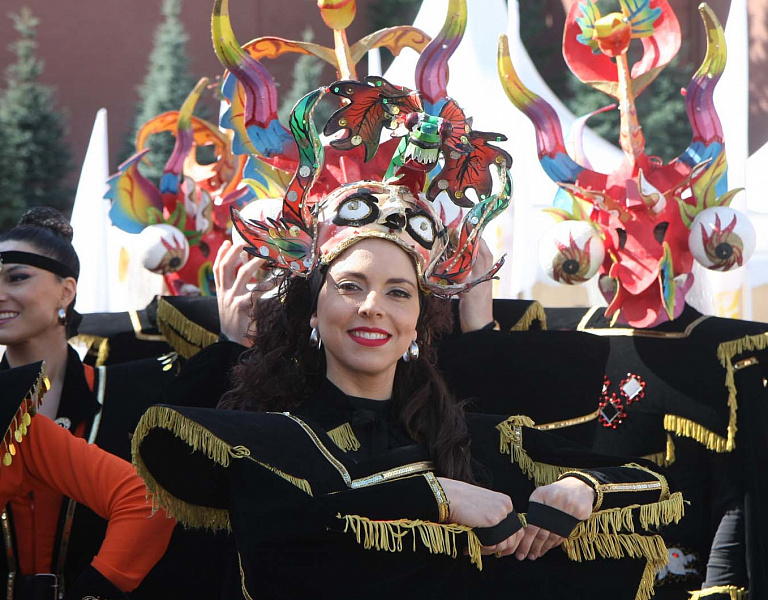 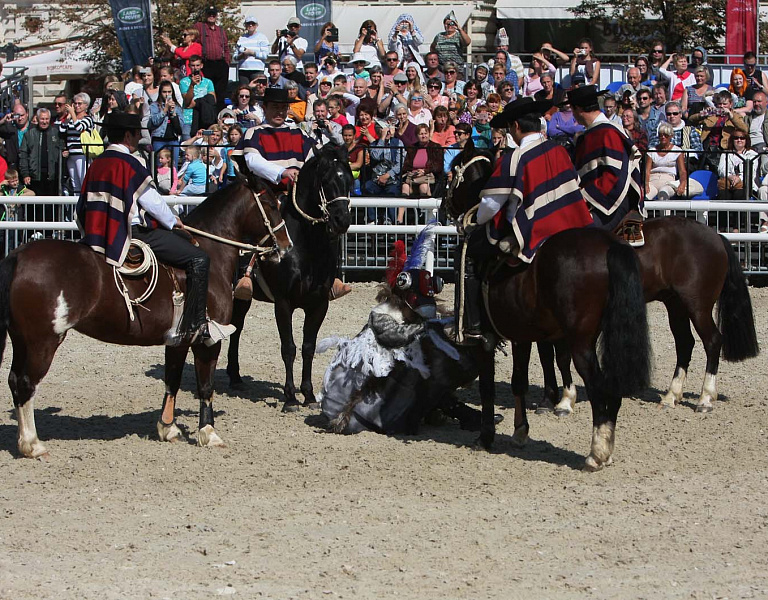 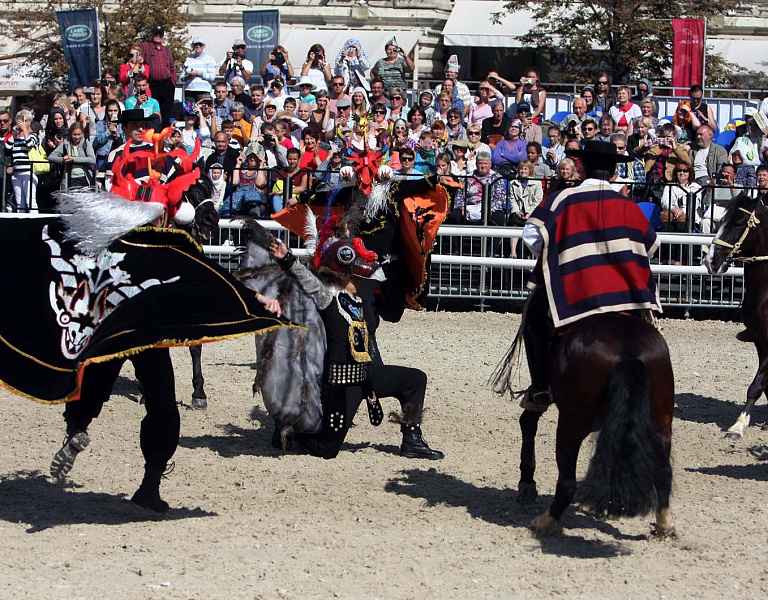 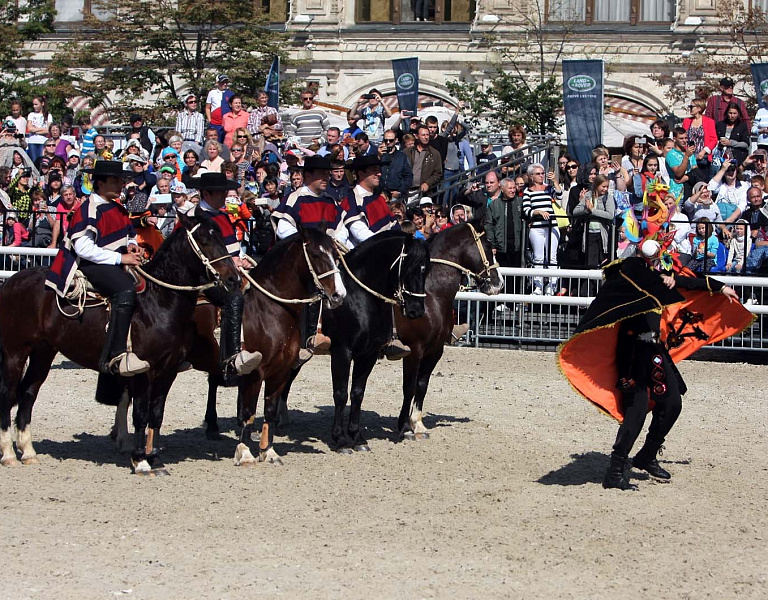 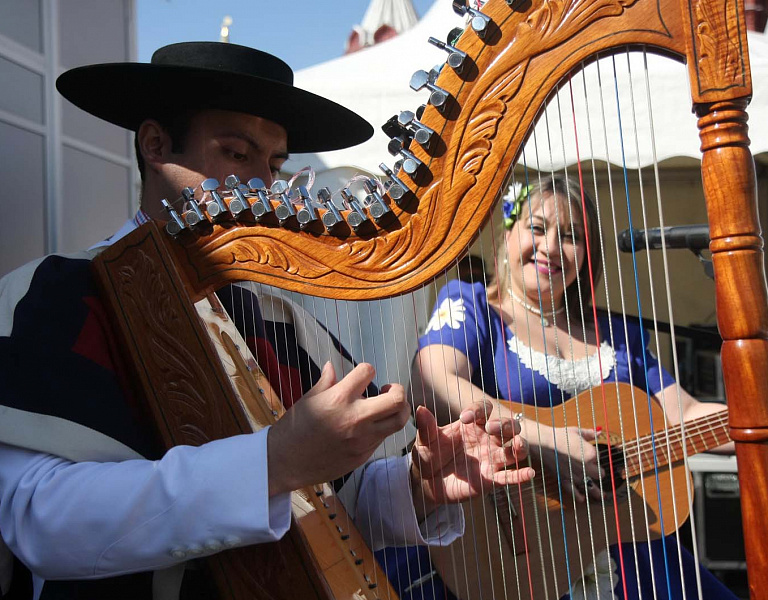 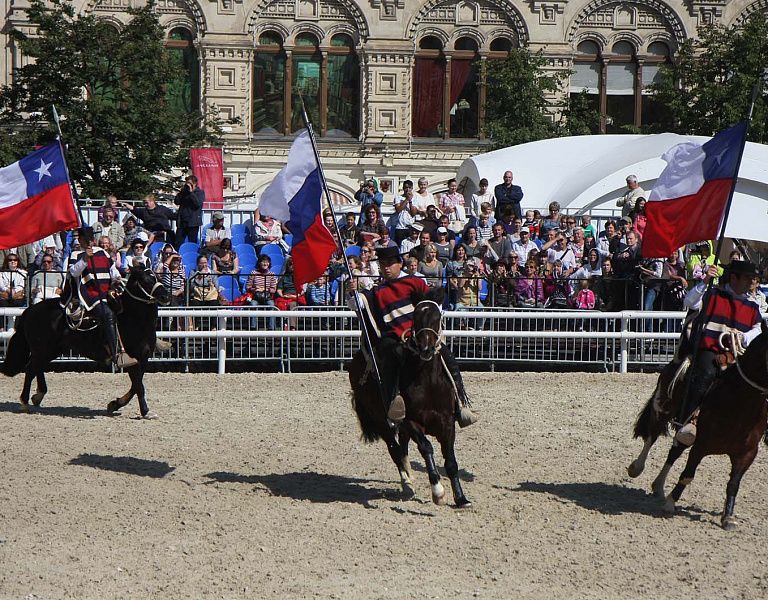 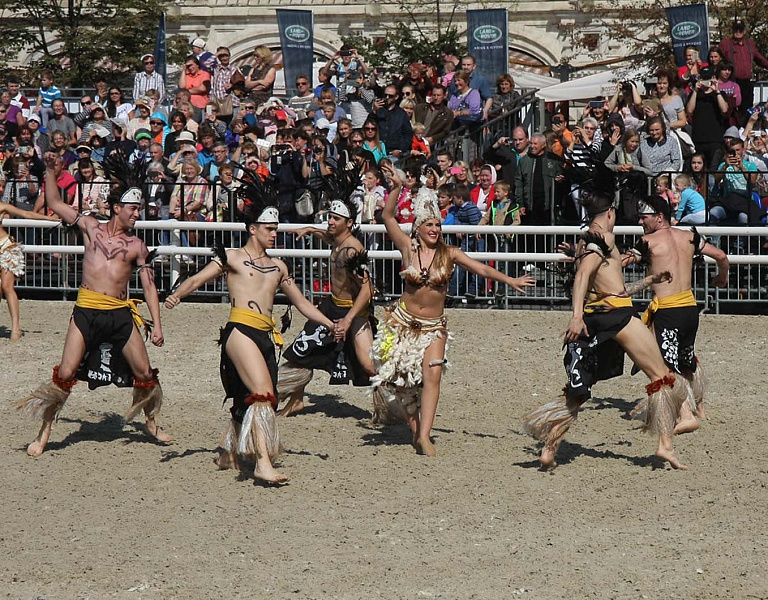 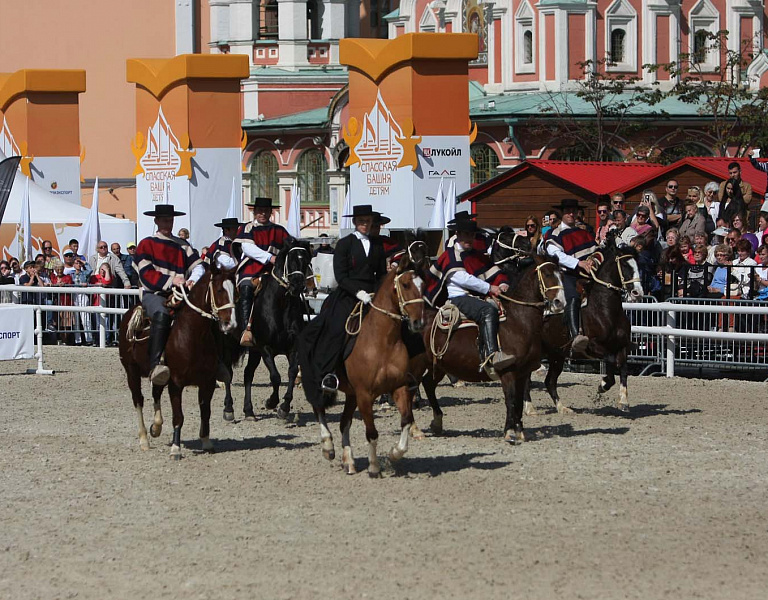 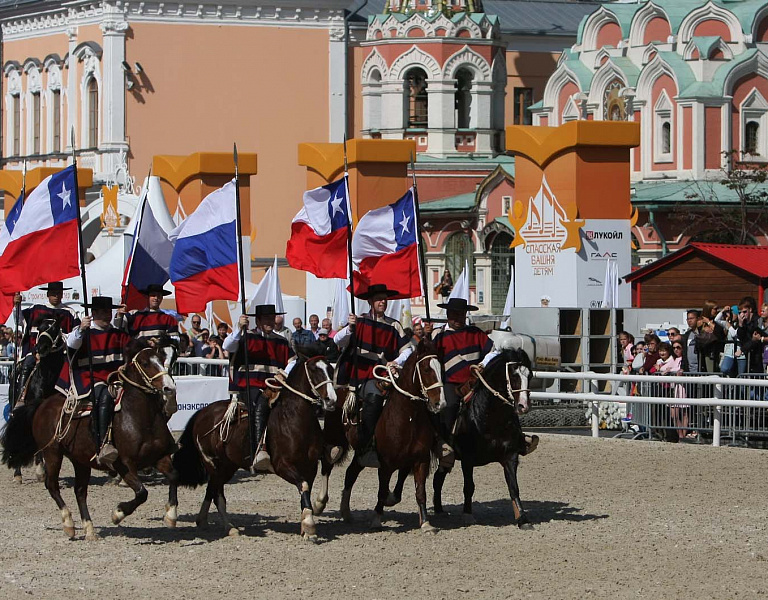 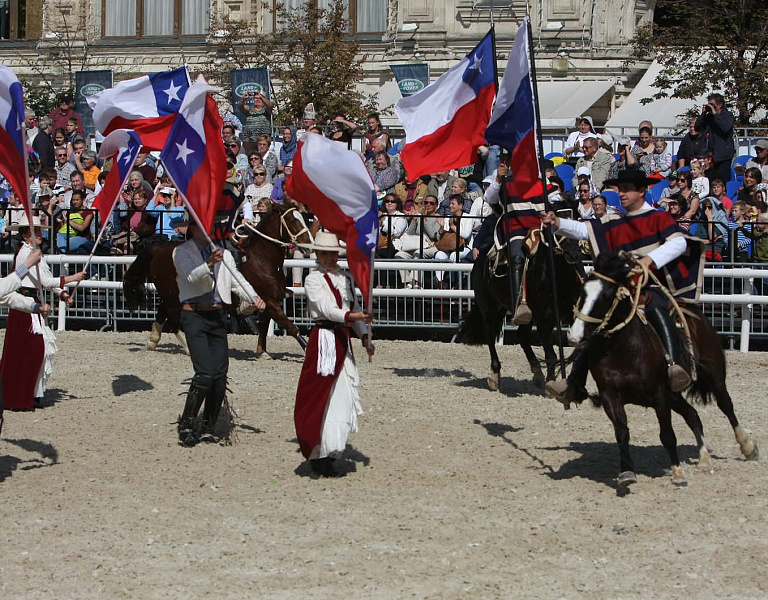 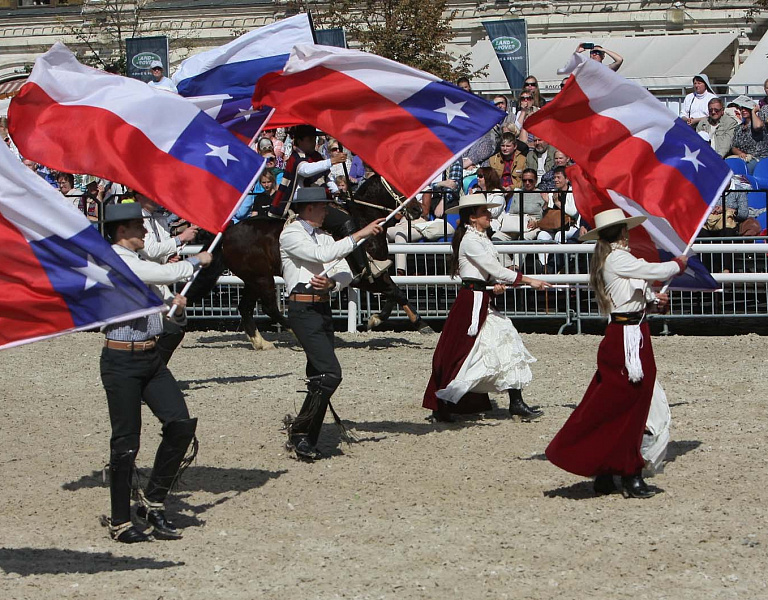 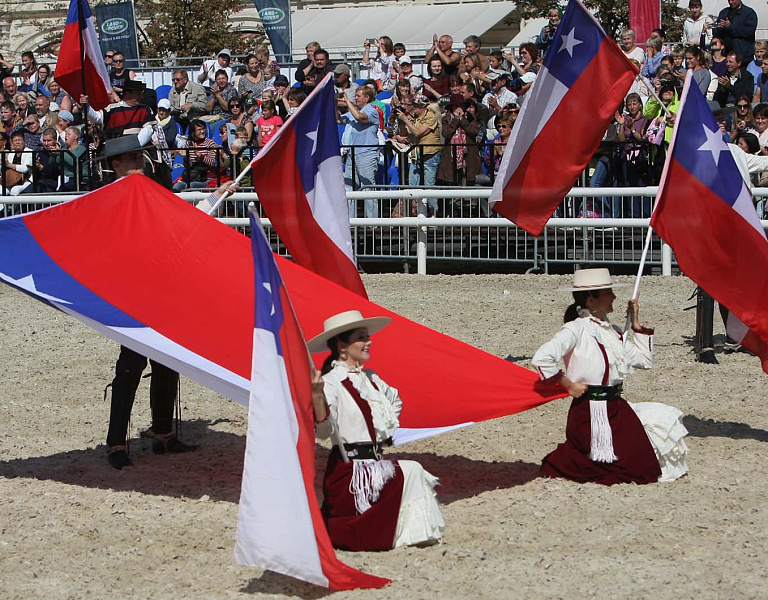 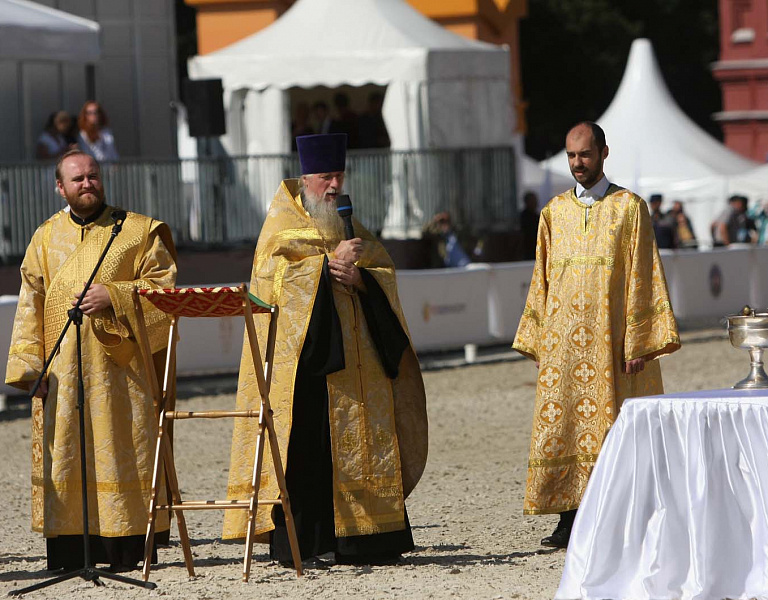 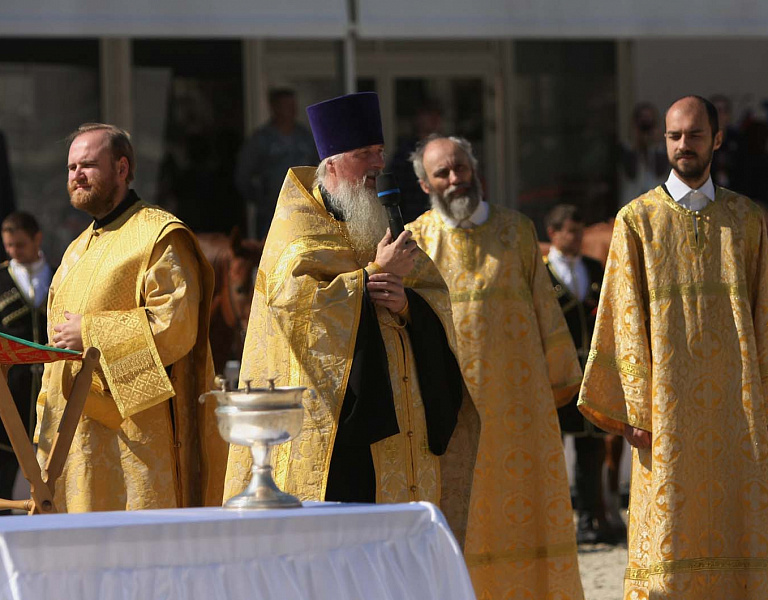