Participants of “Spasskaya Tower on Sakhalin” Festival Won Love of Residents and Guests of Yuzhno-Sakhalinsk!

On Sunday, September 10, participants of the «Spasskaya Tower on Sakhalin» festival pleased the citizens with their music and exhibition performances simultaneously at several sites of the island capital.

In the square near the Government House, residents of  could see the performance of the Presidential Orchestra of the Moscow Kremlin Commandant’s Service of the Federal Guards Service of the Russian Federation and Special Guard Company of the Kremlin Regiment. The solemn, majestic music of the orchestra and perfected movements of the Kremlin guards caused a real joyance and stormy ovations of the audience! After the show, the musicians of the Presidential Orchestra moved in ceremonial order to the Chekhov Center, where they performed many more beautiful pieces of art for the residents of Sakhalin.

The Chekhov Center garden square hosted the performance of the combined orchestra of the Ulan Bator military garrison — the orchestra members and soloist performed vocal and instrumental compositions. The concert of guests from Mongolia was also warmly appreciated by the audience applauding them for a long time.

The Zhdakayev garden square hosted a concert of the orchestra of the garrison. The group performed beautiful orchestral music. The singer from Sakhalin Larisa Kachaykina, who sang « Cossack Girl» and «The Song about Distant Motherland» and other vocal pieces of art performed with the orchestra.

Musicians of the orchestra of the Eastern Military District headquarters came out to the same venue a little bit later. The citizens heard a lot of good music and beautiful compositions during the concert of the festival participants from Khabarovsk. Guests from the banks of the Amur river were deservedly rewarded with applause.

The Gagarin city park of culture and leisure in a picturesque place near the lake hosted an  concert of the military orchestra of the Far Eastern Higher Combined Arms Command School named after Marshal of the Soviet Union K. Rokossovsky, orchestra of the Northwestern District of the National Guard Troops of the Russian Federation (St. Petersburg) and the Belyye Nochi State Ensemble of Song and Dance from the city on Neva.

Participants of the military musical ensemble from Blagoveshchensk were the first to give the performance — musicians and vocalists conquered the hearts of spectators with their performing skills, beautiful voices of soloists, as well as ability to move to the beat of music. The audience applauded!

Then the time came for the orchestra of the Northwestern District headquarters of the National Guard Troops of the Russian Federation. The musicians played several recognizable instrumental compositions from the anthology of the world stage and movies. The talented soloist, laureate of numerous competitions Natalya Korzh, who has performed with the band for more than three years, sang such songs as «Fly Away, Thundercloud», «Hey, Seaman» and «I wish you, my Land». The concert turned out to be interactive: musicians willingly communicated with the audience and even gave an opportunity to all those wishing to play the instruments together with the orchestra, which caused delight among the spectators, especially the young ones.

Incendiary choreography of the Belyye Nochi State Ensemble of Song and Dance (choreographer Yevgeny Malegin) helped the orchestra to create a good mood. Performers of the ensemble from St. Petersburg said that only a part of the group came to Sakhalin — six dance pairs. Several members of the ensemble are on tour in Hamburg (Germany), another part of the group remained to perform at the venues of St. Petersburg. Orchestra members and performers from the northern capital visited our island for the first time. Their impressions of  and Korsakov, where they performed yesterday on the City Day, were simply amazing.

«The sea is very warm here, we could swim yesterday, and the support of spectators is very warm as well," shared his emotions the chief of the military orchestral service of the Northwestern District of the National Guard Troops of Russia and art director of the orchestra, Maksim Konchin. «The Sakhalin residents always applaud us loudly, which is very important for musicians. Yesterday and today the spectators literally bathed us in a standing ovation!» 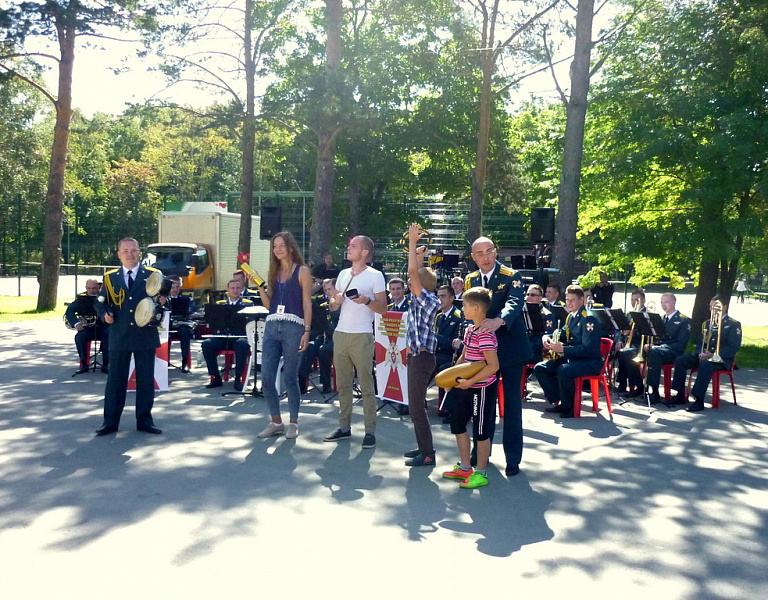 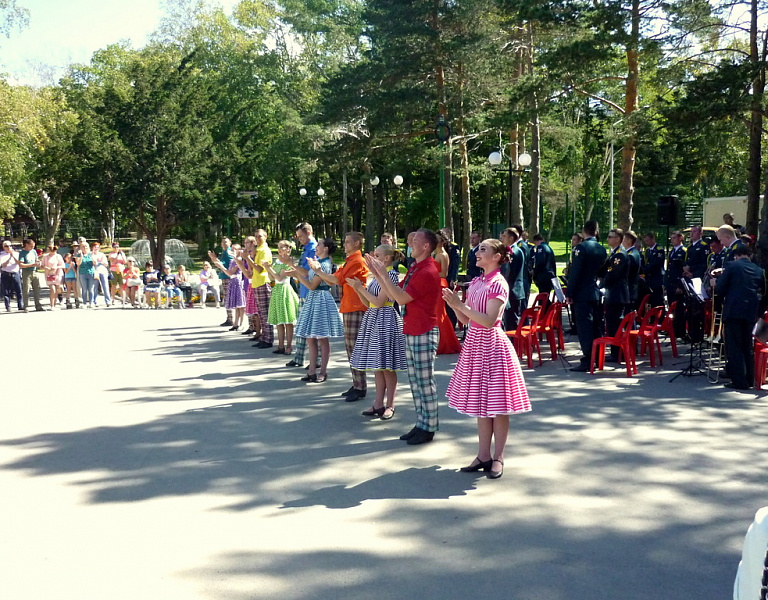 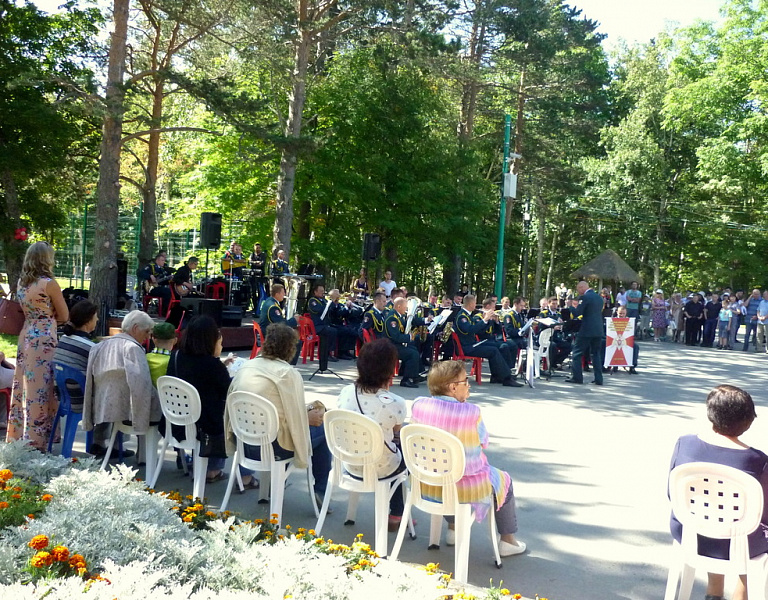 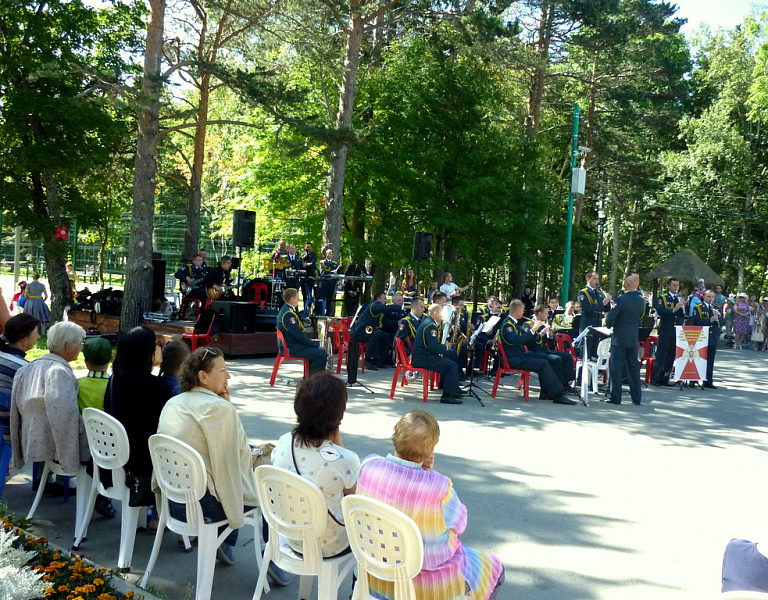 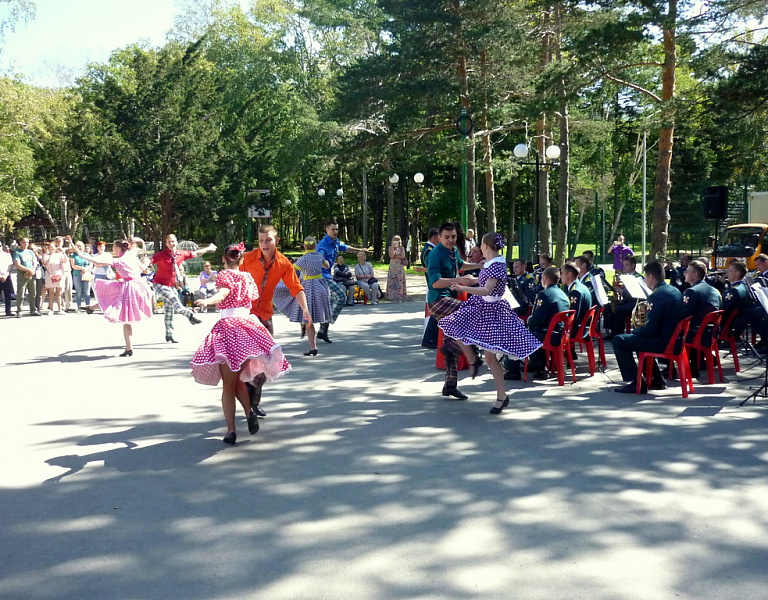 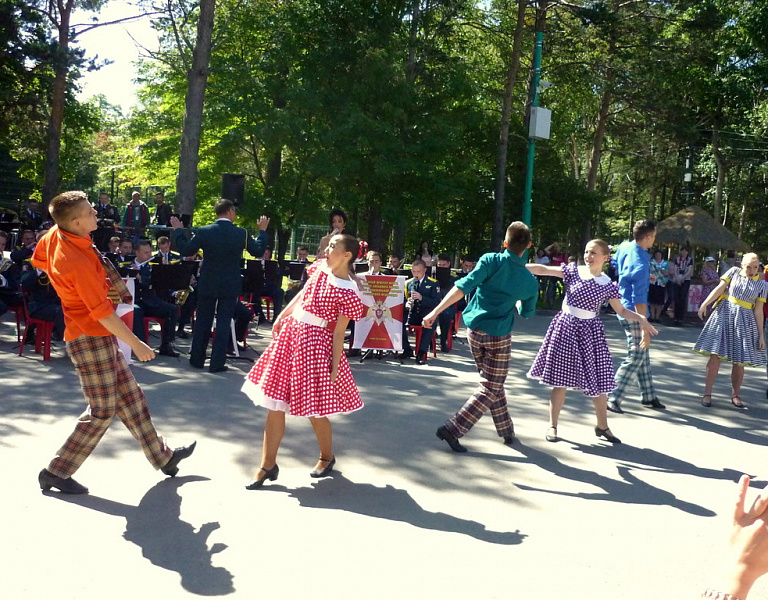 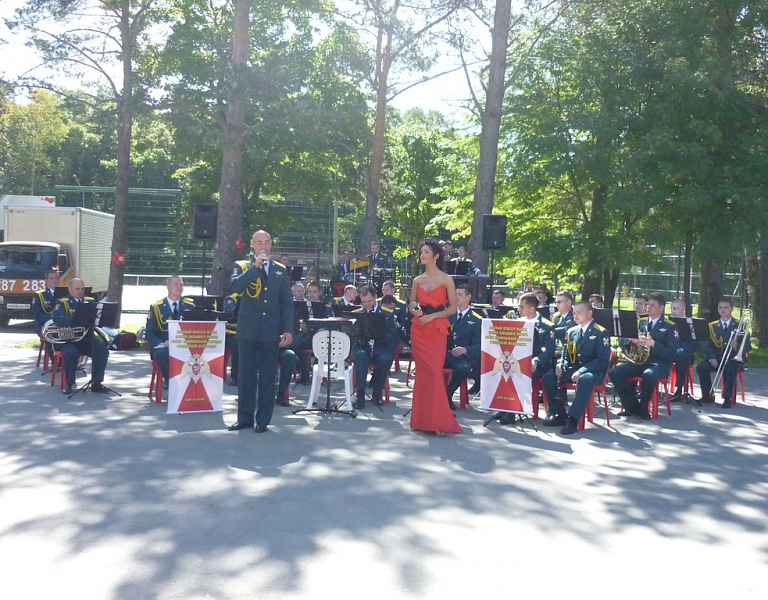 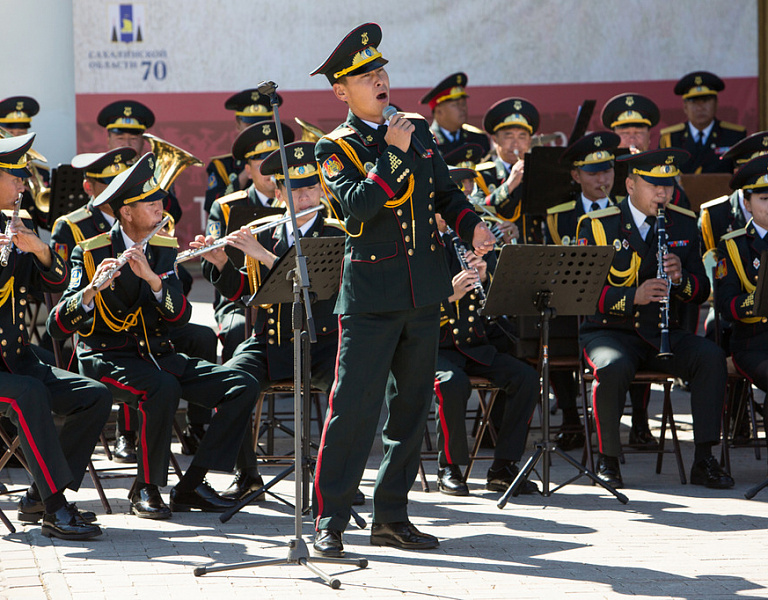 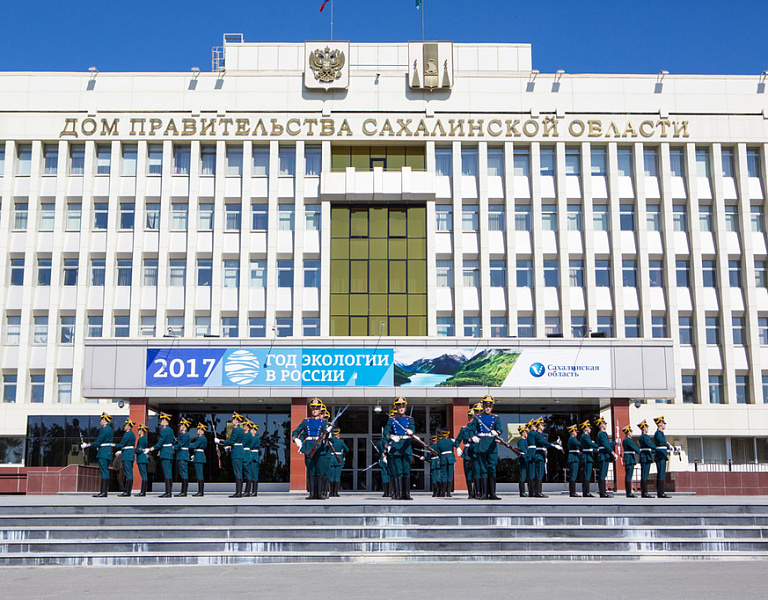 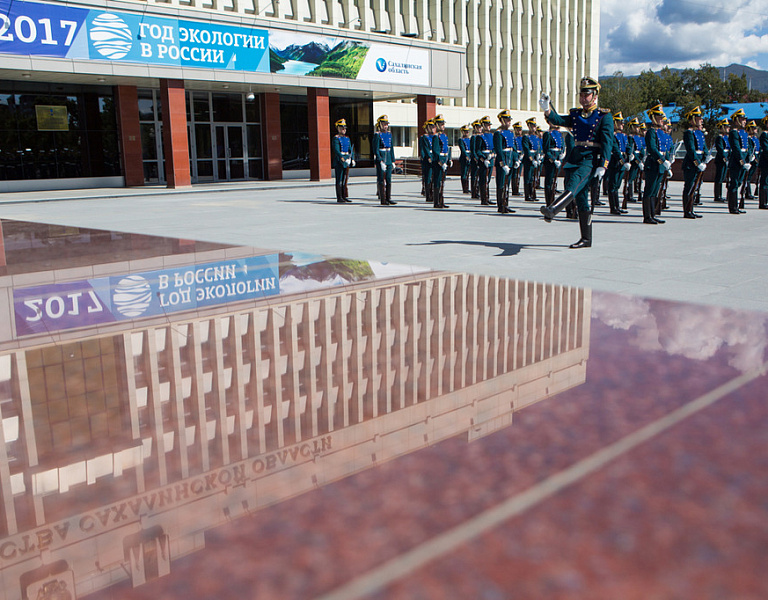 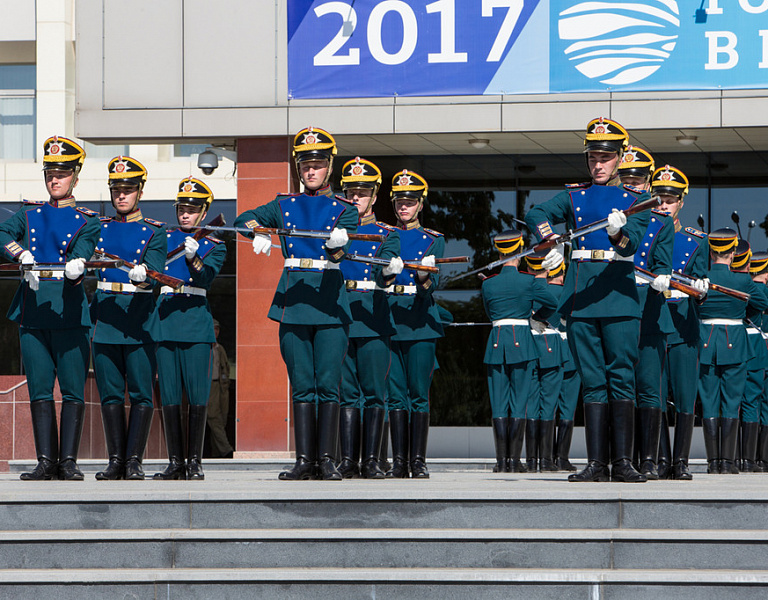 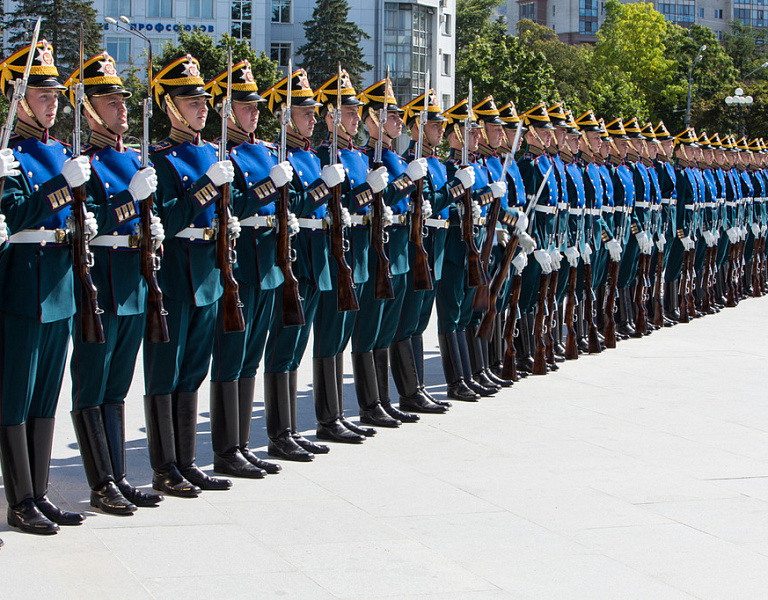 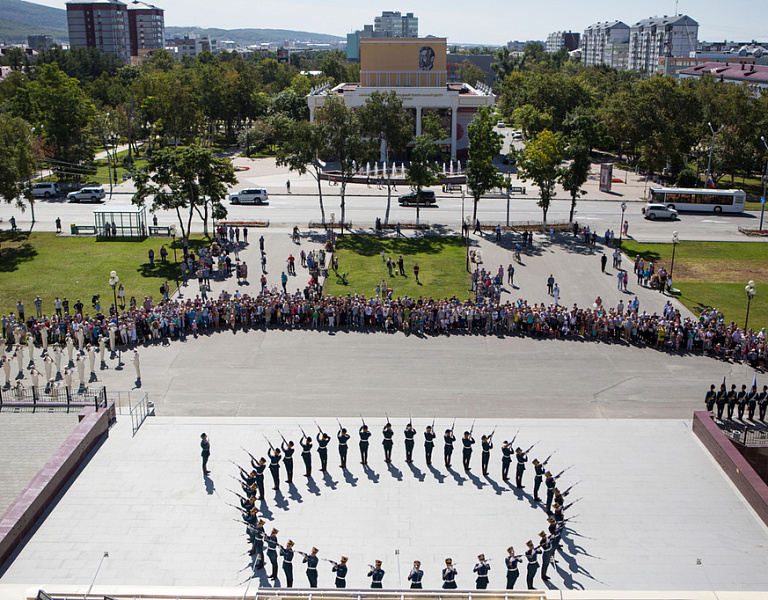 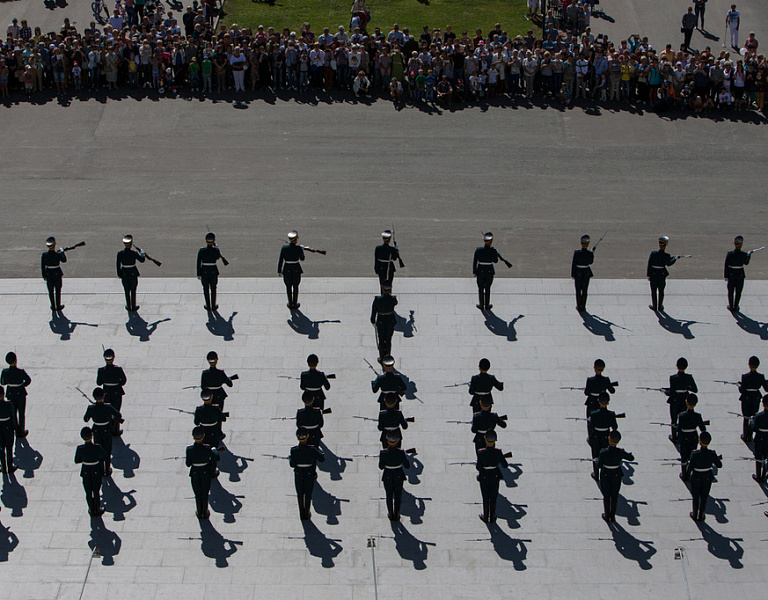 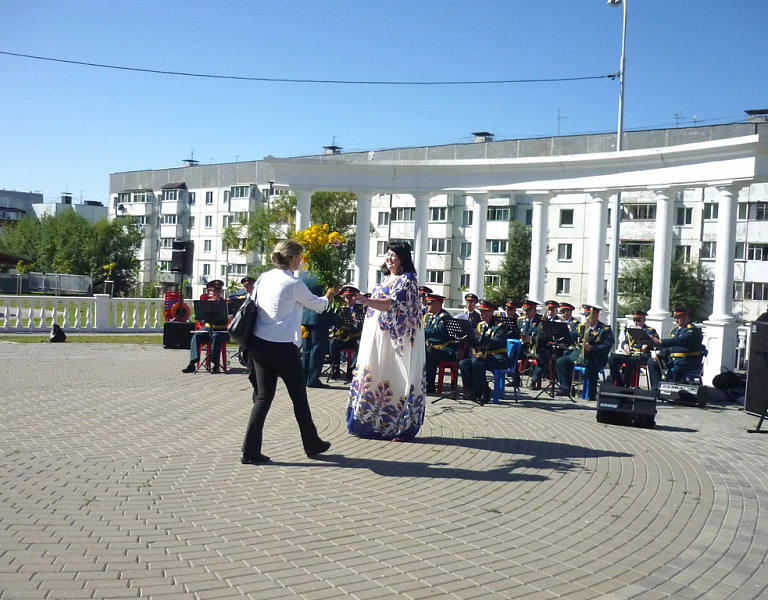 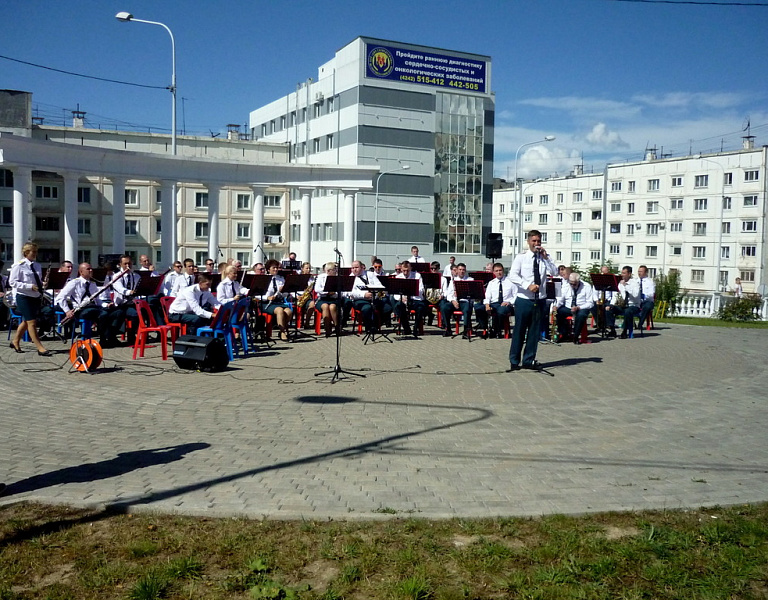 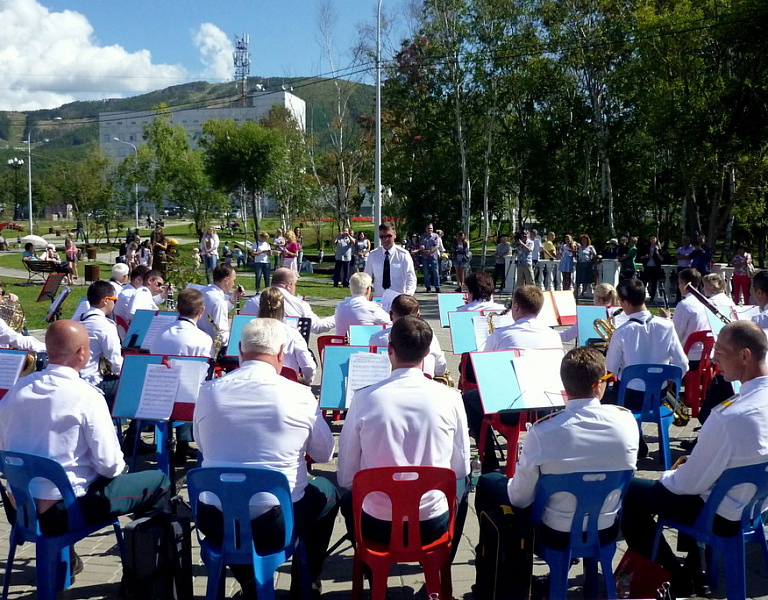 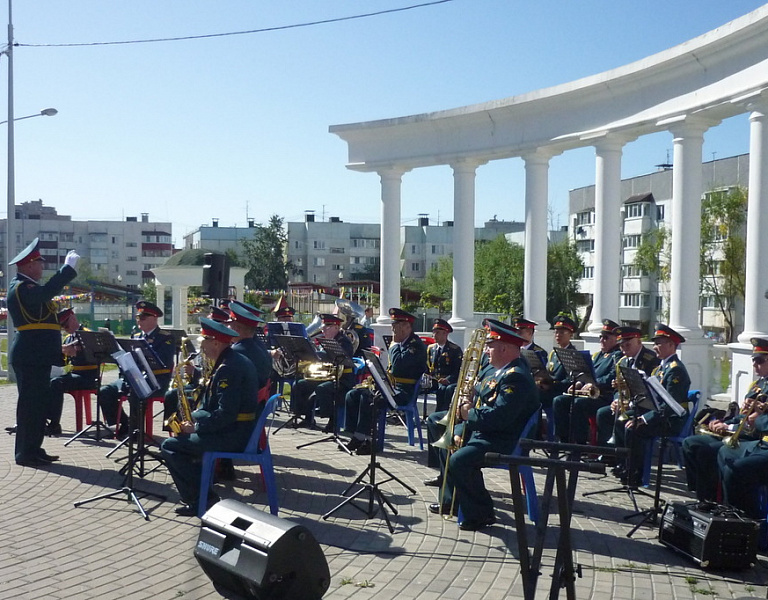 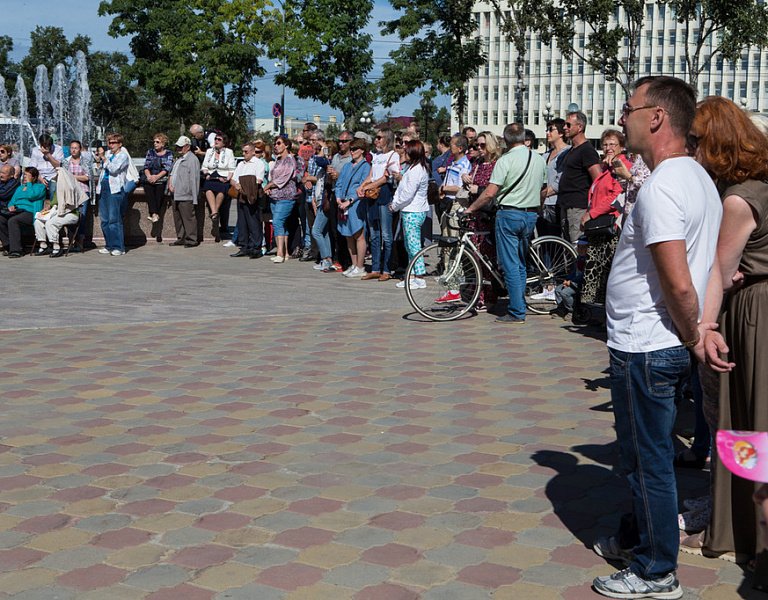 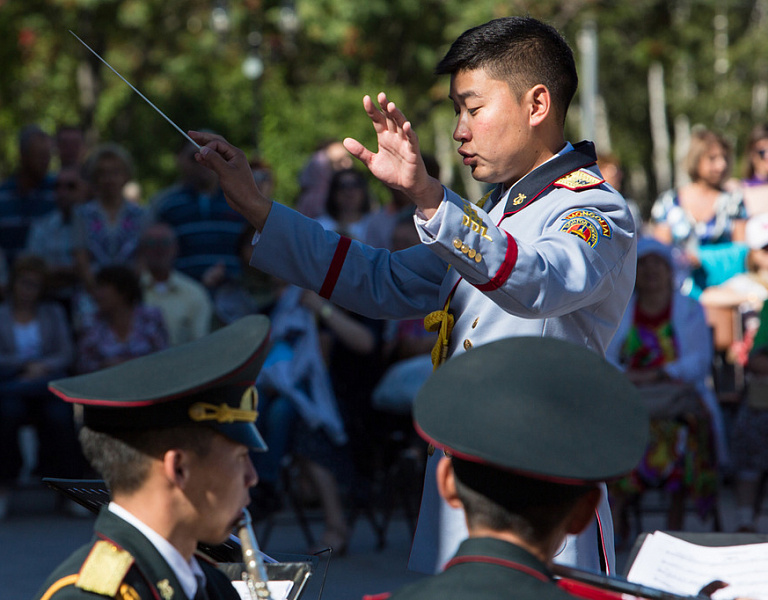 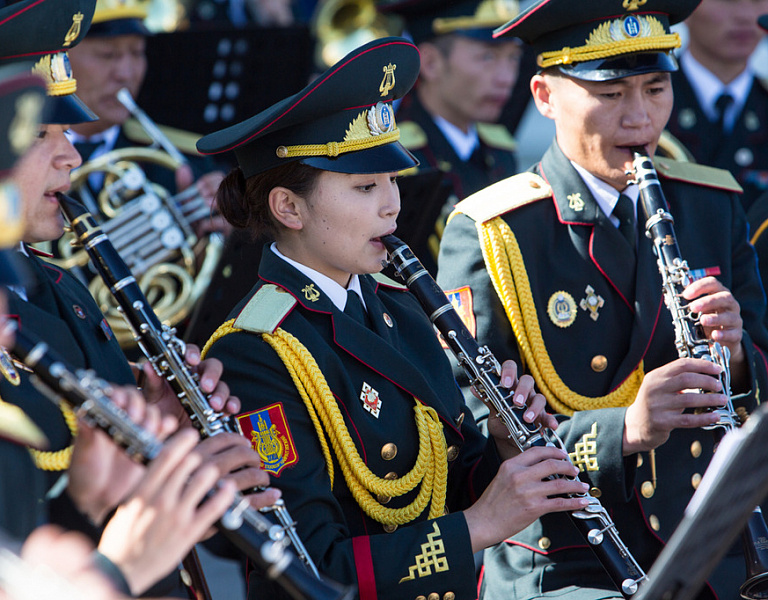 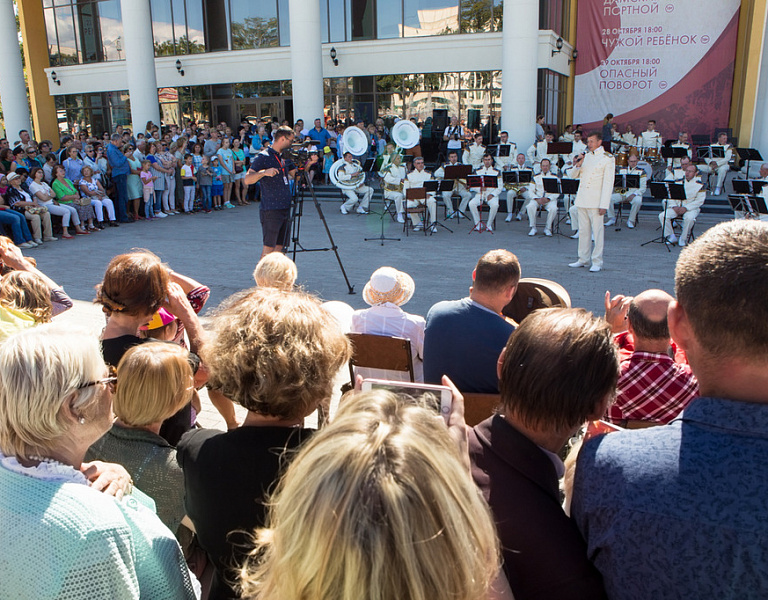 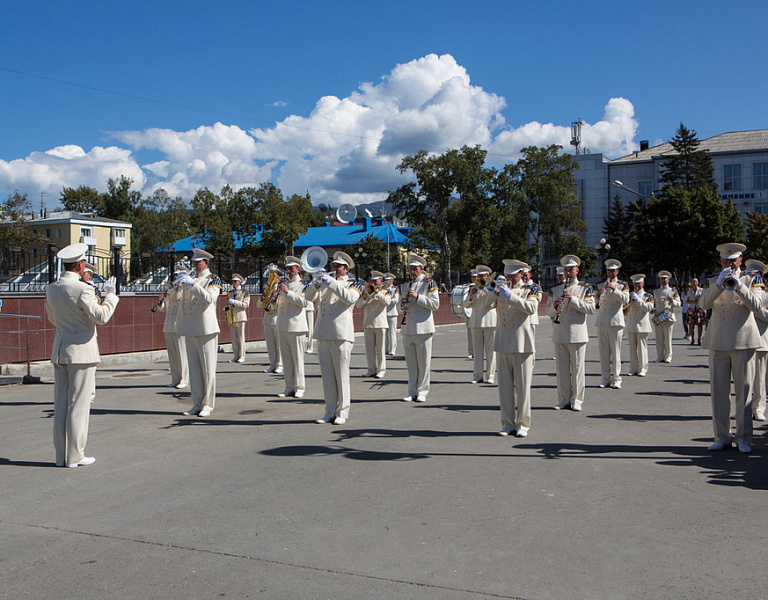 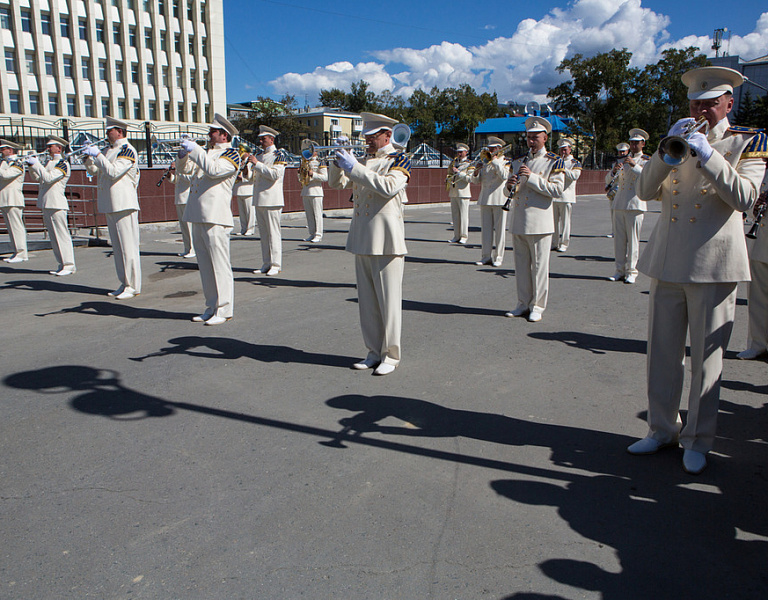 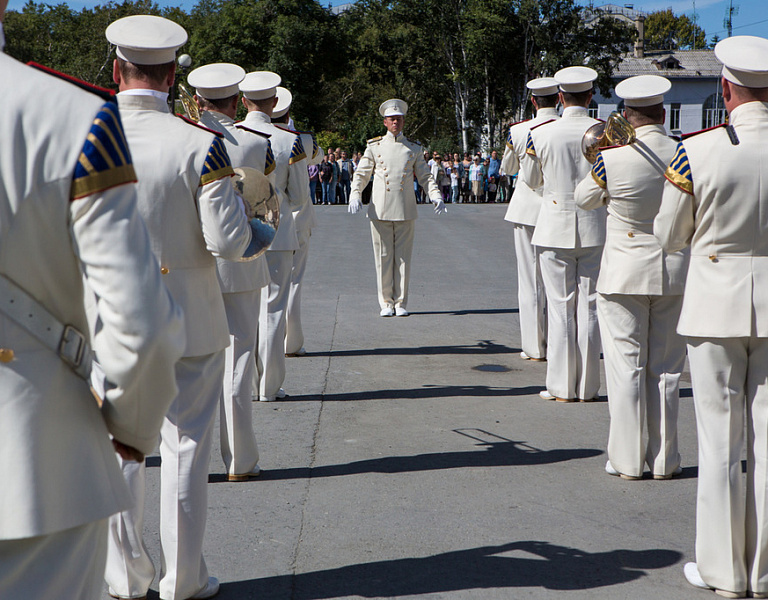 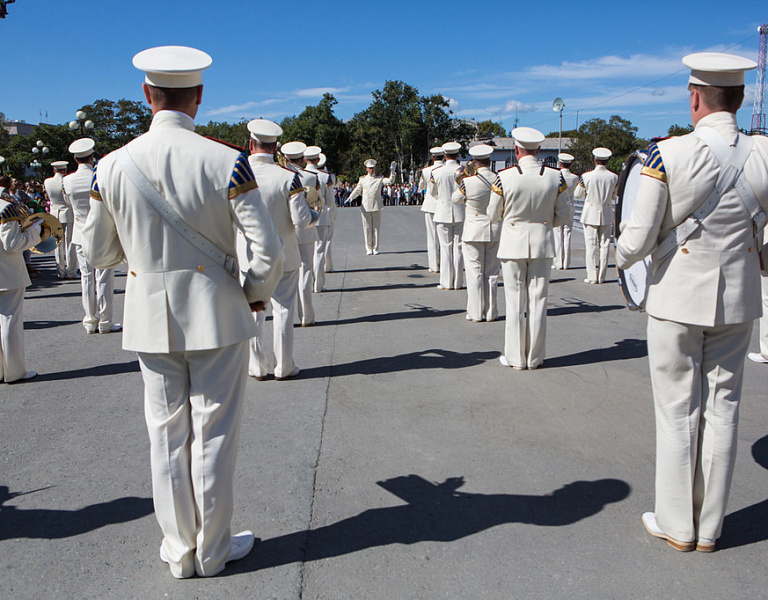 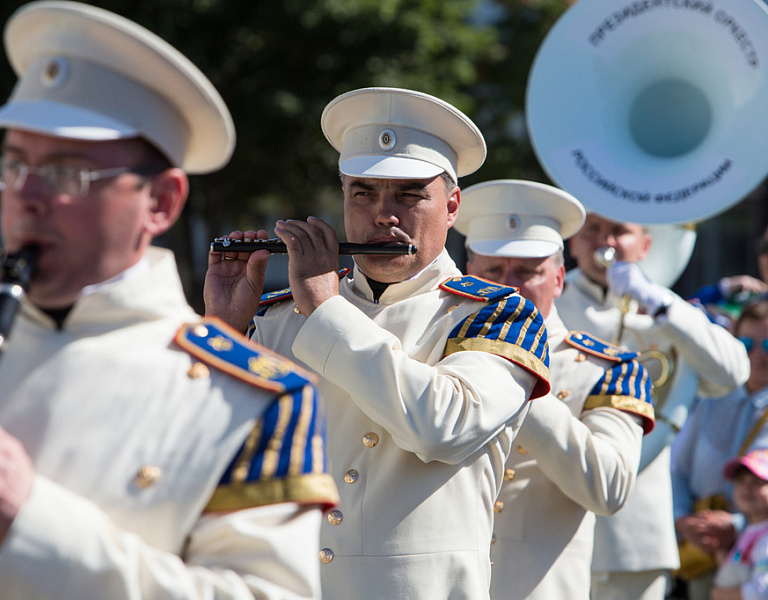